Semjase: “Under the present circumstances, such a step is no longer to be expected, but on the other hand, we realize that we have simply expected too much from you. If we had put one of our androids in your position, then he would have destroyed himself if all of this illogicalness had arisen. We actually expected too much from you; a test has proved this. Quetzal came up with the idea. He wanted to know to what extent a half-organic apparatus could bear the illogicalness that has crept into the group.”

Billy: “So, nevertheless, a crazy idea. But, at the same time, what happened?” 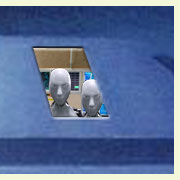 Semjase: “A very bad result. You would describe it as devastating. Quetzal programmed an android with all records of negating and negative forms of all group members. These stored illogical ways of acting and thinking led to the fact that the android became crazy in all of his actions and speeches. He developed his apparatus for this purpose; in addition, you do not understand the whole scope of the experiment:”

“Our androids are programmed based on absolute logic in thinking and acting, and these abilities surpass even our own respective abilities and potential. The results were awful.”

“Now, during the line-to-store transfer, Quetzal also paid close attention to the fact that your own data of your work and all your efforts towards the instruction of the group members and all their interests became programmed into the second android. Thus, the exact situation arose in the two androids, which included everything that happened between you and the group members since the beginning. On the one hand, the overall view of the group members was placed into the first android, and on the other hand, your data was placed into the second android. Expecting something terrible to happen, Quetzal placed both androids in an old beamship in the vicinity of the planet Pluto, where he then activated them and they began to live. Then, on our view screens, we could watch the terrible sight. Already after a few minutes, the android programmed with your data began to become visibly ill, while our recording devices registered an action of complete helplessness. Soon, totally apathetically, he wanted to destroy himself the very next moment, but then suddenly, he senselessly and angrily raised his voice. Meanwhile, the second android spoke absolutely crazy words without thinking and manipulated all of the ship’s apparatuses without sense or purpose.”

“Despite the visible internal difficulty of the android programmed with your data, he tried again and again to bring the other android stored with the illogical data to reason, which he apparently managed to do quite often. But truly, this was only apparent because as our recording devices clearly determined, the attempts at reconciliation and reason only worked so far that the logic of the words of the android representing you released reassuring impulses, while the second android did not at all keep in mind to make himself own the logical explanations.”

“The investigations of the registry devices unambiguously proved that the negatively programmed android had developed a blatant form of self-addiction, egoism, and individualism, as well as a lust for power, and was not determined, despite the superficial acknowledging of the logical explanations offered to him, etc. to make himself really own them.”

“Truly, as the recording devices unambiguously showed, he only wanted his own will to count and to enforce it, which finally went so far that your android rapidly deteriorated and suddenly became crazy. As we could see from our devices, his artificial organic brain mass slowly started to cook and to steam. Then, there was an explosion, and his head was torn up beyond all recognition.”

“Meanwhile, the other android, who only cared about this briefly, continued to act completely illogically and, moreover, spoke very confused and crazy things. Then the moment came when he wildly and senselessly hit the ship’s equipment and created an inferno when he accidentally touched the automatic self-destruct mechanism of the ship, and it was destroyed in an immense explosion.”

“For us, it was proof that we had expected inhuman traits from you. What an android cannot take, a human life form cannot take either. Only through Quetzal’s test could we grasp the full scope of what had caved in on you over all the years. Through all of our analyses, etc., we still did not know enough, which is why the self-destruction of the androids had to reveal the whole scope to us. That process of yours was also the reason why Quetzal carried out this horrific test.”