Fareed Zakaria (was mentored by the Globalist/One World Order ideologue double-agent Henry Kissinger): “Just to be clear Mr. President, I…the word brilliant was in the Interfax translation. I realized that other translations might say it ‘bright’, but I used the official Interfax translation. But let me ask you another question. You have dealt with a great deal, Mr. Trump you have never met. Hillary Clinton was Secretary of State…in your very long questions and answers with the Russian people, you made a joke about…when somebody asked you about her…you said, I think that the Russian idiom is ‘a husband and wife is the same devil’ and what it means in the English version is ‘it’s two sides of the same coin’. What did you mean by that…and what do you think…and how did she do as Secretary of State, you dealt with her extensively?”

President Vladimir Putin: “Well you know, probably, I probably just said that hot-headedly. Probably I was just impulsive when I said that about her. I did not work with Hillary that much. You know Mr. Lavrov was our Foreign Minister back then. That was him to work with her. I would like to say that I worked a lot with the American president back then, and I can say we shared good relations. And I am even grateful to him for the signs of attention and respect to me, personally, and to Russia when I started my term as the president with the Russian Federation. And speaking about Madame Clinton, she probably has her own view regarding the development of the Russian-American relations, but there’s one I would like to draw your attention to, it’s not relevant to Russian-American relations or to any other big political issues. It is more relevant to human resources policy, because, you know, based on my own experience I can say the following: I have seen many people changed after they were appointed at some office. Because, you know, they have different responsibilities, they start to think differently, to speak differently and even their appearances change. Because you know we believe in this regard, I can say that, we believe that the sets of responsibility of the head of the state of the United States, and the United States is a country that a lot depends on in the world. We hope that the sense of responsibility will encourage the future American president to work together for a more secure world, to work constructively.”

To validate President Putin’s comment: In the BILLY MEIER CONTACT REPORT #593 – August 2, 2014: A reference was made as to why President Barack Obama was unable to fulfill his promises and why he’s not the same person. 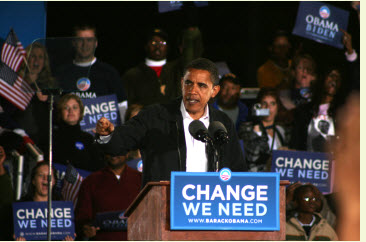 Meier: …You recently told me that Barack Obama is no longer the same man, as he was at the beginning of his presidency.

Ptaah: That is correct, because he was psychologically transformed in his thoughts and ideas by those under direct and indirect control (i.e. of the ruling elites).

Meier: So he has other thoughts.

Meier: It is probably also that his opponents who come from the democratic ranks as well as from the Tea Party, the Republicans, the business leaders, the defense powers, the military and consultants, etc., let him now swing like a pendulum according to their will without him having realized the psychological brainwashing, because he’s not aware. So he can no longer implement his earlier ideas, because the resistance has become so blatant that he can no longer fight for them.

Ptaah: I have no further comment. Link: Read Article

(And at the St. Petersburg International Economic Forum 2016 President Putin asked the question: Will the next president of the United States deviate from their political promises? From this revelation, it is now clear what truly happened to President Barack Obama: He became a changed man with different political ideas brainwashed into him by agents of the ruling elites, and his campaign ideas were just pushed aside. If Hillary Clinton wins, much would not have to be done in the area of mind-control psychological programming, because she’s already a War Hawk from previous conditioning, if that will be the direction of her administration. But if Donald Trump wins, (and his administration is to continue on the same war path) he will have to undergo the same mind-control psychological programming treatment as Barack Obama.

And segments of the United States population who have rationalized dislikes with undertones, sometimes with verbal attacks toward certain politicians, are often unaware that these politicians are programmed to serve the special interests of the Ruling Elites’ Multi-national Corporation Order and not the voting populace. [Where divisions of the people verbally attack politicians due of their job performance or reneging on election promises because the people are unaware that the politicians are front agents, bound to the “ruling elites” power structure, and since the ruling elites power structure is shielded from the corporate media through silence, the people cannot target it, and so the “Ruling Elites” keep assigning politicians, over and over again, in positions of authority to implement their agendas. The populace should be more inquisitive about the “real masters” of the politicians – who are acting as representatives for the people.] And true humanitarian hopes should not be entrusted in western presidential candidates…because they are controlled by the financial elites that are on a mission to rule the world, and much of the population is not in their future plan. Please understand that these politicians are not their own bosses and are employees of the Multinational Corporation Order. Some of the things you can be certain to continue are worldwide chaos, color revolutions, wars, etc., and terrorism will give the manipulators cover. If President Obama…has disappointed multitudes, the same can be expected from the next U.S. president if the deception continues.)

President Barack Obama’s Contribution To The Ruling Elites Dictatorship One World Order Plan:
“(SEGMENT 1 Starts At 2:00) …and for the International Order, that we have worked for generations to build, …(SEGMENT 2 Starts At 3:47) ordinary men and women are two small minded to govern their own affairs. That order and progress can only come when individuals surrender their rights to an all powerful Sovereign.” – President Obama, at the Bilderberger Conference 2014. Link: Video Reference Clip – The Speech Quote Is Misleading – Not A Coherent Stream, But Rather Two Segments From The Speech Joined Together To Create A Seamless Audio. Link: The Full Complete Speech Is Here

In general, both are NEW WORLD ORDERs. But they are not the same!!! and this has to be understood:
2. The order we will all see into 2050 AD is a Multi-polar World Order. This means that all countries will be at the decision table and contribute, mutual respect; and all countries will keep their sovereignty. This order will come about after the chaos is over and evil-doings are subdued. The United Nations in New York has become dysfunctional because of the United States, allies and the “ruling elites”, and will eventually disband. And a new UN-like organization will be located elsewhere for all the countries to gather and such an idea is already drafted and dormant – the framework is written-up for the new charter.
1. And the One World Order is where the upper tier dictatorship leader countries (i.e. the United States, United Kingdom, European Union…) under Rothschilds….control, make all the decisions to subdue and govern the other countries who are just subordinates and vassals with no sovereignty. The feud ongoing now is to destroy the One World Order platform and prevent it from becoming an influential organization.

References – Links:
[ If China, Russia Create New World Order, Philippines ‘Will Be First to Join’ | Russian Foreign Ministry: US should not use UN Security Council as site for PR-campaigns | Philippine president threatens to leave ‘stupid’ UN | Secret File Confirms Trump Claim: Obama, Hillary ‘Founded ISIS’ to Oust Assad | PAPER: GLOBALISTS ON THEIR KNEES! | OBAMA FINAL GLOBALIST (i.e. Ruling Elites) PUSH… | Republican Chairwoman Resigns After Racist Joke Mocking Obama | Watch people attack Hillary Clinton for dishonesty | Lie by Lie: A Timeline of How We Got Into Iraq | Chilcot Report: Tony Blair Could Face UK Legal Action Over Iraq Invasion | Kasich and Bush attack each other over helping poor people with healthcare | Why Do Most White People Hate President Obama? | Why are there so many people who absolutely hate George W. Bush? | When Ronald Reagan was called a ‘liar’ it was shocking and disrespectful | George W. Bush didn’t just lie about the Iraq War. What he did was much worse | Bush Looks An Awful Lot Like A Monkey ]