Cloning human organs has been in the news publicly since the year 2000, but the knowledge on how to grow them has been in serious development since the 1960s.

A cursory back track, before cloning organs, surgeons were tinkering with organ transplant using primates in the 1930s. However, in 1837 a corneal allograft transplant was done using a gazelle; and in 1905 the first successful human corneal transplant was done at the Olomouc Eye Clinic by Eduard Zirm in the Czech Republic.

Into the 1970s organ transplant progressed, but the issue was the rejection of the donor organ. Scientists were put to the task of finding a serum to block the donor organ from being rejected in the recipient. One of my sources noted that by 1977 news surfaced that such a serum, an antigen, was produced from special animal substances found in fetus using recombinant DNA technology. The self-building substances of cells in the serum, bonds with the recipient’s body cells so that the donor organ is accepted. Much testing was done secretly and it was now time to put the discovery into public practice, said the source. And terrestrial scientists were encouraged to start implementing the discovery to save lives by an extraterrestrial group that was monitoring the development on the Earth and noted that the time was now mature to bring the technology to the people.

Organ transplant is often rejected by the recipient’s body, for it is unable to integrate the organ’s foreign substances because the recipient’s immune system is in defense mode, and that’s why the self-building substances of cells in the serum are needed for cellular fusion. Also, a donor human organ carries what is called “Fluidal Forces”, also known as “Cellular Memories”, and can be harmful in the long run as it can influence the carrier of the transplant positively or negatively according to the strength of the Fluidal Forces in the organ. This is where the donor organ transfers memories into the recipient’s body. 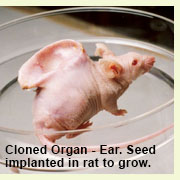 After human clones were being secretly deployed in the late 1970s, into the 1980s research was well underway to clone human organs. The exploration was to find the biological seed capable of growing organs: Undifferentiated biological cells are called Stem-Cells, and are found in the inner cells of the blastocyst – a 3- to 5-day embryo. The inner cells generate the entire body of the organism, including all of the many specialized cell types and organs – such as the kidney, heart, lungs and other tissues. But also Stem-Cells can be derived from a person’s blood, skin, etc. Once the Stem-Cells are developed into expressing key markers, i.e. early cells that forms the kidney for example, a “seed” is created. That seed is then cultivated further and implanted into an aquatic animal – i.e. stingray and other fish species. The small sea creatures are used to host small cloned organs such as the kidney, heart, finger, hand, ear, etc. While the larger sea creatures are used to host large body parts for example a complete leg, a complete arm, etc. The aquatic animals are used because of the fluid environment they live in to float the body organ appendage around so that it does not distort in shape while growing. (Stem-Cells technology is the future of medicine and many diseases like diabetes, cancer and aging related ailments like arthritis will be cured allowing individuals to live healthily into very old age.

Today, Stem-Cell rejuvenation therapy for the human body is being done at private clinics around the world, but only the hierarchy elites have access to the full-strength of the therapy. For the rejuvenation process, blood is taken from the patient and the Stem-Cells are taken from the separated plasma. The patient’s own Stem-Cells are then supercharged with younger stem-cells and transferred back into their body. A few hours after the procedure, the patient’s body begins to repair itself.)

When a request is given to supply the needed organ, the aquatic animal is seeded to grow the organ, microchipped and put into a tank made from special stainless metal, filled with liquid made from minerals and other nutrients and the liquid is more concentrated than sea water. The seeded aquatic animals swim around the tank with their human body part appendages. At the end of the organ’s gestation period, the aquatic animal is tracked using the implanted microchip and retrieved from the tank. The organ that was seeded is now fully developed and is removed. The animal is not eliminated, but is reseeded again and the process starts all over. The organ removed is transplanted into the recipient and the incision is sealed with a laser-like device that rapidly heals the incision area without scarring. The quickly and newly formed skin is said to be lighter in color, but that the normal skin color returns over time.

Organs cloned are better suited because they are synchronized to assimilate in the recipient’s body and there is no problem of Cellular Memories crossing over.

Despite the experimental progression stories that the news media gives about cloned organ research as being many years away, secretly, this is not the truth, because already human organ farming is being done privately for the hierarchy elites. (And lower ranking subservient elites who do not have access to this technology have people framed in murders where they are killed for their organs. One such case, according to a rumor, was the Craigslist killer Philip Markoff who murdered several females many years ago. He went to prison and eventually committed suicide. And the hierarchy elites who are always reiterating their humility service to humanity, they are all hypocrites and very selfish to the core. Because all the countries where wars rage and countries that are overpopulated, the Western countries are deeply involved in organ trafficking. For example, in Pakistan, Nepal, etc. a percentage of individuals in the population have only one kidney, because the other kidney was sold to clients in the West for money.)

Some cloned organs, the science of growing them, are not yet perfected in terms of durability. The fragile fusion (i.e. seeding and growing) of the process is not yet able to implement correctly the longevity strength on a cellular level in the cloned organ matrix. As a result, for example, a recipient can have a few heart transplants during their normal lifespan. But research continues to try and resolve the longevity mechanism issue. Refer to the science-fiction movie The Island.