BATTLEFORWORLD – January 7, 2017 (updated June 26, 2017): Discussions are being held at high levels regarding President Donald Trump of the United States working with President Vladimir Putin of Russia. Certain “financial ruling elite families” in the background who have been meddling in U.S. political affairs for centuries are beginning to come around regrading some type of productive alliance between both presidents.

But is the posturing just to take advantage of Russia’s position regarding space knowledge and technologies? And not only space (Mars, Moon, etc.) collaboration, but also working with Russia to eliminate radical Islam, etc.

Also, President President Xi Jinping of China is to, according to the opinions of the elites, enter into strong relations with the U.S. And the elites who were calling for hostile policies against China are having second thoughts.

But often there is blackmail lurking in the distance as these elite families change their minds like blinking lights. Today they want to destroy the planet with nuclear missiles fighting World War III and the next day they want to save the planet and make peace; becoming very vocal regarding Climate Change and Global Warming. Maybe they are only so concerned because of their Carbon Tax scheme, which is totally usurious.

Note: Things are very fluid in the intelligence community, constantly changing, and not all the entries reported here are with certainty, and so discernment is advised.

Putin And Trump Meet On Sidelines Of G20 Summit 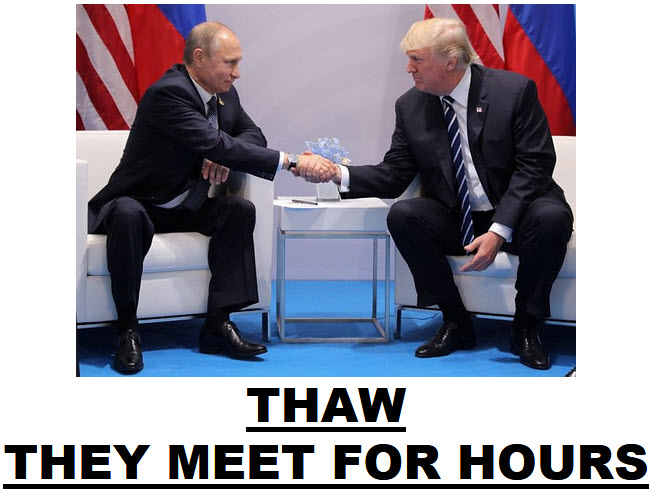 BATTLEFORWORLD – August 3, 2017: Well, they are going to try, but likely not to be successful as there are counter-forces fighting back and subduing the NeoCons and Deep-State operatives. Lots of craziness are at play, i.e. technologies.