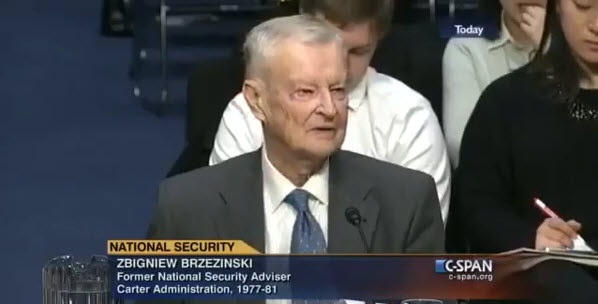 BATTLEFORWORLD – March 13, 2017:   Zbigniew Brzezinski, served as a counselor to President Lyndon B. Johnson (1966-1968) and as U.S. National Security Adviser (1977-1981) under the Jimmy Carter Administration. He’s also co-founded the Trilateral Commission with David Rockefeller, serving as director from 1973 to 1976. And so Brzezinski is rather a deep fixture in the United States geopolitical planning toward the globalists endgame.

And Brzezinski vehemently disagrees with the coming together of China and Russia, and regards this alliance as a threat to western civilization – the hegemonic goals of the United States globalists.

In his strategy planning, he advocates that China should be pulled away from Russia by whatever means necessary. And this means machinations of blackmail, scandals, war fervor (North Korea, Japan, etc.), internal revolution, etc. to have China capitulate and turn towards the United States and away from Russia.

In the United States, threats are being made attacking China by the alternative and corporate media talk show circuits. In the irony of the workings of the globalists, you have the populists, nationalists, etc. in the United States who are anti-globalists, being manipulated into supporting the anti-China rhetoric. These same ones were quick to call out President Barrack Obama for being a globalist and communists. And here they are being manipulated by globalist agents in media to ridicule China and are unaware of it.

Brzezinski’s mission now is to separate Russia from China and set them against each other, and this undertaking is of light-speed importance going into the year 2020.

In his published work, Toward A Global Realignment, the essay outlines a proposal seems appropriate for Mrs. Hillary Clinton as the next president of the United States, to be vigorous in war planning. Brzezinski, the globalist, remains convinced that America can do whatever it wants in the world. But the failure of Hillary Clinton to secure the White House has not stopped the geopolitical strategist Brzezinski, because the task ahead now is to manipulate President Trump to deliver parts of the globalist plan since the whole plate is no longer possible.

Before Barack Obama became president, to have him continue the globalist world order plan war path, Brzezinski proposed to use the strategy he used against the former Soviet Union invasion of Afghanistan. To carry out the plan it was necessary to invent and unleash the Al Qaeda Islamic fundamentalists supported by Saudi Arabia.  The plan began to unfold in the presidency of George W. Bush when on September 11 2001 a coup was organized by the neocons to cement the entire West around America’s war leadership where the former Mujadiheen (i.e. guerrilla fighters in Islamic countries) were transformed into a useful cover story about terrorism, and to make the world safe countries would  be called on to form an alliance against the Islamic terror jihad. A tactic the neocons hope will secure their world hegemony and drive a wedge between Russia and China.