RT – May 10, 2017: Russian Foreign Minister Sergey Lavrov said Russia and the US should seek ways to solve international problems together, despite any difficulties in relations, following a meeting with US President Donald Trump.

“First of all, we have discussed our cooperation on the international stage. It’s been confirmed that despite all the difficulties, our countries can and must act together to help solve key problems on today’s international agenda,” Lavrov said at a press conference at the Russian embassy in Washington, following a meeting with President Trump.

Lavrov: our talks now are free of ideology, as they were in Obama’s era, but we talk business now. How to solve world issues together 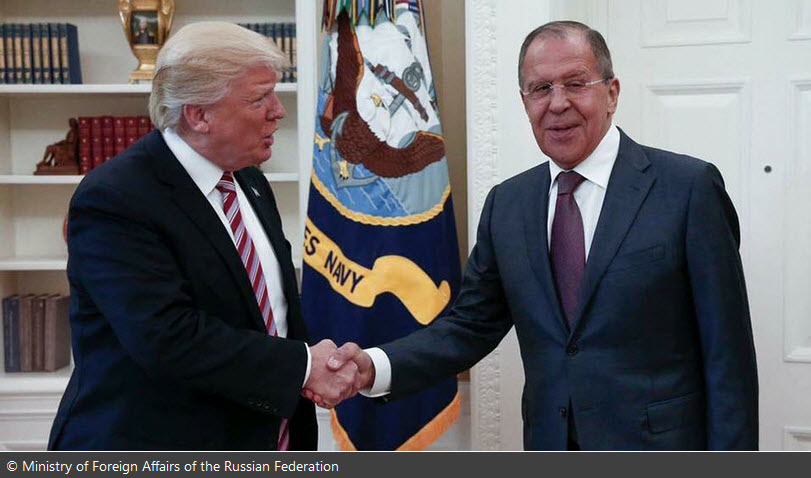 The US and Russia will continue working together on various issues, including the conflicts in Syria and Ukraine, Lavrov noted, adding they aim to remove all barriers hindering efficient cooperation.

US officials are harming their own people by saying that Russia might have influenced the elections and is standing behind US internal affairs, Lavrov also said.

“I think this is even humiliating for American people to hear that US internal affairs are being governed by Russia. How can it be that such a great nation is thinking in this way?” Lavrov said.

However, reporters apparently would not let the issue lie, repeating the same question several times. Lavrov was compelled to repeat that there has been no solid evidence of any meddling. Link: Read Complete Article

What’s Behind The Anti-Russian Sanctions And “Association Sanctions” Against Russia?

BATTLEFORWORLD – March 2, 2017: …But Russia is aware of this pending move and is not counting on Trump to be forthcoming because of obstacles in the US power structure. In fact, deep down, some sources believe, that the United States is being setup to give itself a severely “self-inflected horrendous financial wound”, to which, none or one might come offering assistance. Are the anti-Russian sanctions deadly bullets being fired by the US into itself? Is the “plot” behind the anti-Russian sanctions a brilliant surprise?

And the political voices in the US who are calling for more anti-Russian sanctions, in truth they are the ones who are anti-American and against the American people, because they are very well aware that when the US economy crashes, the people will eventually turn on each other.  And the war mongering political voices behind the anti-Russian sanctions will have gone into hiding at their guarded locations, disassociating themselves from the people of the United States who are to be sacrificed in chaos.