ZEROHEDGE – August 28, 2017: From Montezuma to the shores of Tripoli, the US has had a military presence across the world, from almost day one of its independence. For those who have ever wanted a clearer picture of the true reach of the United States military – both historically and currently – but shied away due to the sheer volume of research required to find an answer, The Anti Media points out that a crew at the Independent just made things a whole lot simpler.

Using data compiled by a Geography and Native Studies professor from Evergreen State College in Olympia, Washington, the indy100 team created an interactive map of U.S. military incursions outside its own borders from Argentina in 1890 to Syria in 2014.

To avoid confusion, indy100 laid out its prerequisites for what constitutes an invasion:

But indy100 didn’t stop there. To put all that history into context, using data from the Department of Defense (DOD), the team also put together a map to display all the countries in which nearly 200,000 active members of the U.S. military are now stationed. 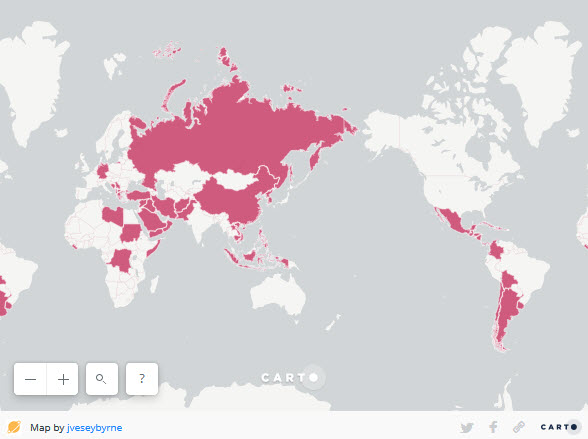 The publication of the maps comes just after President Donald Trump announced the military would not be pulling out of its 16-year engagement in Afghanistan – a reversal of his previous stance – and that the U.S. would seek stronger ties with India to combat terrorism in South and Central Asia.

This map is bullshit. America has never invaded Russia or China.

We invaded Canada twice.  Revolutionary War, War of 1812. Not shown

If financial invasion doesn’t work, then military invasion is administered. This is a list of countries that have resisted.

If you had a map of the countries Cuba has invaded with its troops (for its size) it would make us out as pikers.

Damn it, we missed a few places. Someone needs to send this to the CIA for planning purposes. GDP up, populations down……all hail the Empire.

All The Millions Of People The Jews Killed… In The 20th Century http://bit.ly/2mpEvwh

You missed the Fenian Raids of the late 1860’s. These had tacit US government support.

Also on Russia, after the Russian Revolution a number of western powers including both the USA and Great Britain landed forces in Russia in support of the White Russians who were fighting the Red Russians. This occurred shortly after the end of the First World War and involved invasions from the north through the Murmansk area and another attack from the south through Iran.

The US also invaded and occupied Iceland during WWII in order to prevent the Germans from doing the same thing. Iceland still does not have a military and the NATO partners take turns stationing aircraft in Iceland to defend gains ??

The USA invaded Russia in 1919, from the north. The troops were poorly supported and were frozen out. It invaded China during the Boxer rebellion. See the movie 55 Days at Peking with Charlton Heston. The US is still technically in possession of Taiwan insofar as there has never been a treaty to end WWII there.

Sort of… during the communist revolution in Russia during WW1, England and the US dropped off troops in Russia to help the Tzar and try to hold up the eastern front of the war. It was unsuccessful.

As others have noted the US did invade Canada. There are other countries missing as well.

To our great shame, our American “leaders” funded the Bolshevik Revolution which put millions of Russians to death.

During the Bolshevik project, our military was sent to Russia.