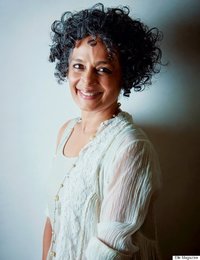 Flags
“Nationalism of one kind or another was the cause of most of the genocide of the twentieth century. Flags are bits of colored cloth that governments use first to shrink-wrap people’s minds and then as ceremonial shrouds to bury the dead.” By Arundhati Roy

War Talk
“Our strategy should be not only to confront empire, but to lay siege to it. To deprive it of oxygen. To shame it. To mock it. With our art, our music, our literature, our stubbornness, our joy, our brilliance, our sheer relentlessness – and our ability to tell our own stories. Stories that are different from the ones we’re being brainwashed to believe.

The corporate revolution will collapse if we refuse to buy what they are selling – their ideas, their version of history, their wars, their weapons, their notion of inevitability.

Remember this: We be many and they be few. They need us more than we need them.

Another world is not only possible, she is on her way. On a quiet day, I can hear her breathing.” By Arundhati Roy

Future World
“Another world is not only possible, she is on her way. Maybe many of us won’t be here to greet her, but on a quiet day, if I listen very carefully, I can hear her breathing.” By Arundhati Roy

The American Establishment
“Anti-Americanism is in the process of being consecrated into an ideology.

The term ‘anti-American’ is usually used by the American establishment to discredit and, not falsely — but shall we say inaccurately — define its critics. Once someone is branded anti-American, the chances are that he or she will be judged before they’re heard and the argument will be lost in the welter of bruised national pride.

What does the term ‘anti-American’ mean? Does it mean you’re anti-jazz? Or that you’re opposed to free speech? That you don’t delight in Toni Morrison or John Updike? That you have a quarrel with giant sequoias? Does it mean you don’t admire the hundreds of thousands of American citizens who marched against nuclear weapons, or the thousands of war resisters who forced their government to withdraw from Vietnam? Does it mean that you hate all Americans? …..

To call someone ‘anti-American’, indeed, to be anti-American, (or for that matter anti-Indian, or anti- Timbuktuan) is not just racist, it’s a failure of the imagination. An inability to see the world in terms other than those that the establishment has set out for you: If you’re not a Bushie you’re a Taliban. If you don’t love us, you hate us. If you’re not good you’re evil. If you’re not with us, you’re with the terrorists.” By Arundhati Roy

Corporate Globalization
“There is a notion gaining credence that the free market breaks down national barriers, and that corporate globalization’s ultimate destination is a hippie paradise where the heart is the only passport and we all live together happily inside a John Lennon song (Imagine there’s no country…). This is a canard.” By Arundhati Roy