SPUTNIKNEWS – October 8, 2017: Russian Senator Alexey Pushkov argued on Sunday that the visit of Saudi King Salman bin Abdulaziz Al Saud indicated the end of US dominance in international relations. (BATTLEFORWORLD: The United States will not rest idly by and will now create problems for Saudi Arabia as it moves closer to Russia. And the US just announced a $15 billion dollar arms package of THAAD missile systems to the Saudis. And the US needs this money to create more debt, but will the arms package delivery succeed?) 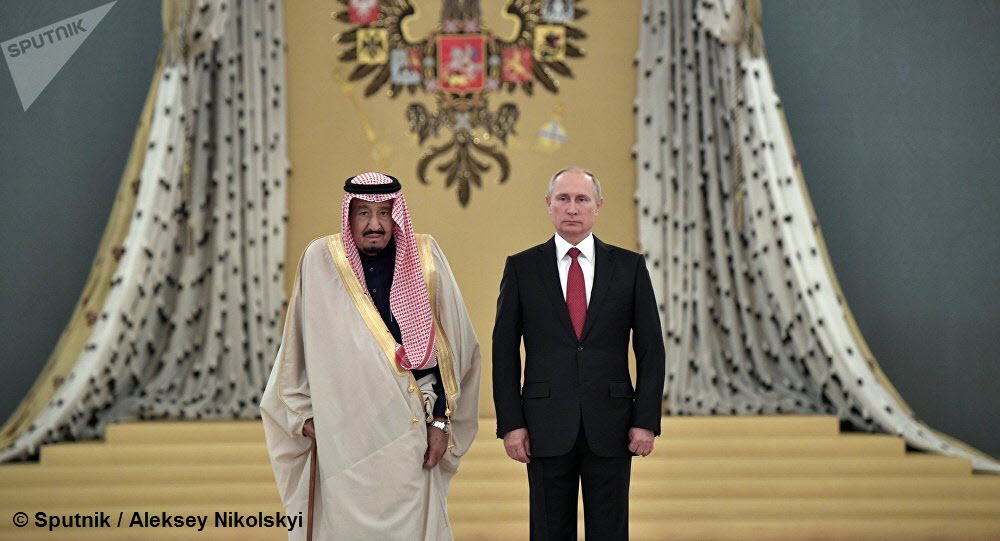 “Riyadh will cooperate with Moscow despite the hardline US approach to Russia. There is an important sign: The United States is still influential, but its dictate is over,” Pushkov said on Twitter.

On Wednesday, Saudi Arabia’s delegation led by King Salman bin Abdulaziz Al Saud arrived in Moscow for a four-day state visit. It was the first ever visit of a reigning Saudi monarch to Russia.

During the visit of the Saudi King, a range of bilateral agreements in various areas have been signed including the preliminary agreements on acquisition of Russian S-400 missile defense system. Russian President Vladimir Putin called the visit a “landmark event.”

References – Links:
[ Russia Will Become A Powerful Force Against The West ]

BATTLEFORWORLD – November 10, 2017: It appears that someone is trying to get a war started involving Saudi Arabia, Israel and Iran, via the proxies of Yemen, Lebanon using the Israeli military against Hezbollah. And all the major players of the world are deeply involved. The One World Order forces in the United States are very unhappy about their loss of the war with Syria, and are trying to put together whatever pieces they can in their interest. And what have made matters worse is Saudi Arabia moving closer to Russia. And according to Steven Pieczenik on PrisionPlanet with Alex Jones on November 10 – Deep State & Trump: About the US CIA is trying to get a war started in the Middle East with Yemen and Lebanon.

(BATTLEFORWORLD: The war in Yemen is basically the United States using Saudi Arabia as a proxy to fulfill US geopolitical goals. But now you have Russia and the Saudis moving ahead and creating a new friendship, one that the neocons in the US are not happy with, and so the US starts to warn the Saudis about moving closer to Russia.)

SPUTNIKNEWS – October 13, 2017: Citing human rights concerns, a bipartisan committee in the US House of Representatives has called for the US military to stop lending crucial support to the Saudi Arabian war in Yemen. The widely condemned Saudi intervention into the Yemeni Civil War has led to the deaths of tens of thousands of people, many of them civilians.

The primary way the US has supported the Saudi-led coalition’s incursion has been refueling missions flown by the US Air Force that allow their Saudi counterparts to continue a campaign of airstrikes in their southern neighbor. The new bill, House Congressional Resolution 81, would bar the US military from participating in any military action, including support for any side, in the Yemeni Civil War except operations against the powerful Islamic militant group al-Qaeda in the Arabian Peninsula (AQAP).

Resolution 81 “in no way restricts our military counter-terrorism efforts in Yemen,” Ro Khanna (D-Calif.), who introduced the bill, told Military.com. “All the bill basically does is say we should not be assisting Saudi Arabia in Yemen.” Link: Read Complete Article

SPUTNIKNEWS – October 14, 2017: Saudi Arabia praises a hardline policy of Donald Trump toward Iran as relations between Teheran and Riyadh have been strained for a long time. The Sunni-led kingdom considers Shia Iran to be its main rival in the Middle East. Link: Read Complete Article