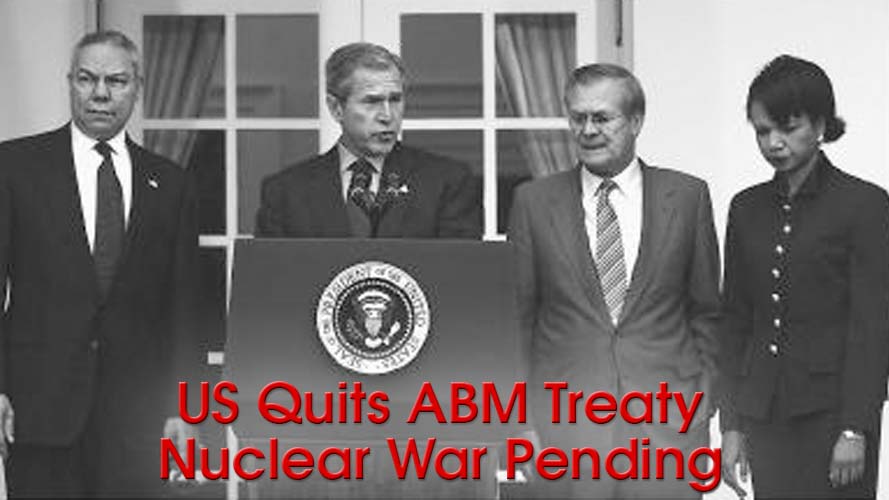 BATTLEFORWORLD – March 5, 2018: Nostradamus foretold long ago that the United States would withdraw from the ABM treaty. And what has unfold is the continuous movement for the breakout of new wars all over the world, with some great plan in mind for world domination.

And in response to the US quitting the ABM treaty and double crossing Russia by darting the Earth with anti-missile defense shield systems aimed at Russia, Russia has responded asymmetrically to the United States.

Here are a few of Nostradamus’ quatrains interpreted:

Nostradamus: Century 2, Quatrain 62
MABUS (i.e. the US-ABM treaty) then will soon die, to come.
Of people and beasts a horrible defeat:
Then suddenly one will see vengeance strike,
Hundred, hands, thirst, hunger when the comet will run.

Nostradamus: Century 4, Quatrain 88
Anthony (i.e. North America), great in name, in his actions base,
at the end (i.e. America as a One World Power falls) will be devoured by lice (i.e. civil wars, etc.).
One who is eager for lead,
passing the harbor (i.e. America’s Naval Fleet, a symbol of military hegemony)
will be drowned by the elected one (i.e. the Multi-Polar Order begins).

Nostradamus: Century 8, Quatrain 77
The Anti-Christ (i.e. the North America One World Order Movement Dictatorship by the Ruling Elites)
very soon annihilates the three,
twenty-seven years his war will last (i.e. America will wage geopolitical wars
around the world and after being defeated all the wars will stop.
A decision regarding America’s faith
will be decided after 2020).
The unbelievers are dead, captive, exiled;
with blood, human bodies, water and red hail covering earth.

Book of Revelation 6:12
(Written by John the revelator on the isle of Patmos.
The Bible was compiled from oral tradition, teachings from the old prophets
and later evangelical followers of the text, with falsified information added over time,
and the movement became the Christian religion of today.)
And I beheld when he (i.e. America decides to start World War III) had opened the Sixth seal,
and, lo, there was a great earthquake (i.e. the pending great Earthquake for California,
United Sates before World War III erupts if war with the US/NATO is unavoidable);
and the Sun became black as sackcloth of hair,
and the Moon became as blood (i.e. the Moon’s weapons become active);
And the stars of heaven fell (i.e. nuclear missiles are launched)…

RT / BATTLE FOR WORLD – October 21, 2018: The article highlights that the US will pull out of the Intermediate-Range Nuclear Forces Treaty (INF) with Russia, AP reports President Donald Trump saying. He cited Russia’s alleged treaty violations, while at the same time vowing to “develop the weapons.”

“We are going to terminate the agreement and then we are going to develop the weapons” unless Russia and China agree to a new deal, Trump said on Saturday (October 21). Although Trump claims that Russia has violated the deal, he provided no evidence of that claim during his Saturday announcement.

Trump made the announcement following a campaign stop in Elko, Nevada, just one day after the Guardian reported that National Security Adviser John Bolton was pushing the president to leave the treaty.

Russia has repeatedly said it will keep strictly observing the INF treaty as long as the US does. However, Russian President Vladimir Putin stated in October 2017 that any withdrawal from Washington would see an “immediate and mirror-like” response from Moscow.

(BattleForWorld: And Donald Trump can unilaterally withdraw from treaties because Congress abdicated responsibility. And more withdrawal from treaties are pending. An article was posted in the year 2015 about the United States withdrawing from the ABM treaty. And this happening, the withdrawal from nuclear weapons treaties, was foretold centuries ago about the US withdrawing from the ABM treaty to pursue the path of war and destruction! …Exploiting the United States, the ruling elites are, to spread their propaganda image of democracy, crony capitalism/economic system ideology and military, along with their conquered allies and military NATO. The third attempt, the front-man for the Anti-Christ one world movement is the image that the United States propagandizes to trick the people of the world that what it is doing is good and for peace, but it is truly a movement based on lies nonstop. [The name MABUS in Nostradamus’ Century 2, Quatrain 62 is referring to a “treaty” that the United States is involved in – the US-ABM treaty. The United States will break the US-ABM treaty that has held together the balance of world power preventing nuclear war. And so the treaty will die and if world war breaks out it will surely bring catastrophe across the Earth. But the Peace Faction in Russia continues to ask the United States for written guarantees that the US-ABM Defense Shield is not directed at Russia, but the United States refuses to give Russia written guarantees, and informs Russia that verbal words should be sufficient to trust.])

(Note: Youtube is censoring videos and channels. The title of the video is “Trump vows to pull US out of nuclear arms treaty with Russia”.)

SPUTNIKNEWS – April 23, 2018: The Issue of Nuclear Non-Proliferation. Moscow will consider the possibility of extending the START treaty only after the United States has fulfilled all its obligations under the existing treaty, Director of Russian Foreign Ministry’s Department for Nonproliferation and Arms Control Vladimir Ermakov told Sputnik on Monday.

“It would possible to talk about the possibility of extending the START Treaty for another five years only when the US fulfills its obligations under the existing treaty. At present, the Americans are not doing that,” Yermakov said.

Ermakov went on to say that the United States hinders nuclear non-proliferation, prompting NATO’s non-nuclear states to train and practice strikes against Russia.

Russia’s growing military might to guarantee peace on the planet

TASS – March 6, 2018: The new ‘breakthrough’ weapons outlined by President Vladimir Putin in his State of the Nation Address to the Federal Assembly on March 1 will arrive for Russian troops on schedule, Defense Minister Sergei Shoigu said at the ministry’s conference call on Tuesday (March 6). And said that today Russia has a modern, compact and hi-tech army”.

In his State of the Nation Address to both houses of Russia’s parliament, Putin announced about the development and trials of the most advanced strategic weapons Russia was creating in response to Washington’s unilateral withdrawal from the ABM Treaty and the deployment of the missile shield both on the territory of the United States and outside its national borders.

The Russian leader stressed that Russia’s growing military might was a reliable guarantee of peace on the planet.