(In the Silent Revolution Of Truth, Compilation Edition, “enhanced”, the free PDF book: Download and read about the future breakup of the United Nations, page 728. [The United Nations organization has become dysfunctional and is often used to push geopolitical goals for one world domination headed by the United States and allies under the control of secretive ruling elites.] Note: Use the page number display located at top right to find the correct page. UPDATED, PDF Format – Links: Book Summary | and Download Book )

RT – March 14, 2018: The West has launched a large-scale campaign to remove Russia from the UN Security Council (UNSC), Senator Sergey Kalashnikov said, commenting on the UK’s accusations against Moscow over the poisoning of Sergei Skripal.

“The West has launched a massive operation in order to kick Russia out of the UN Security Council,” Kalashnikov said, as cited by RIA Novosti. “Russia is now a very inconvenient player for the Western nations and this explains all the recent attacks on our country.”

The Senator believes that in order to curb Russia’s membership there is going to be an attempt to reform the principal UN body tasked with the maintenance of international peace and security. The Russian Federal Council member reminded that the USSR, to which Russia is the legal successor, has been an integral part of the UNSC since its establishment in 1946.

The Coming Breakup Of The United Nations? 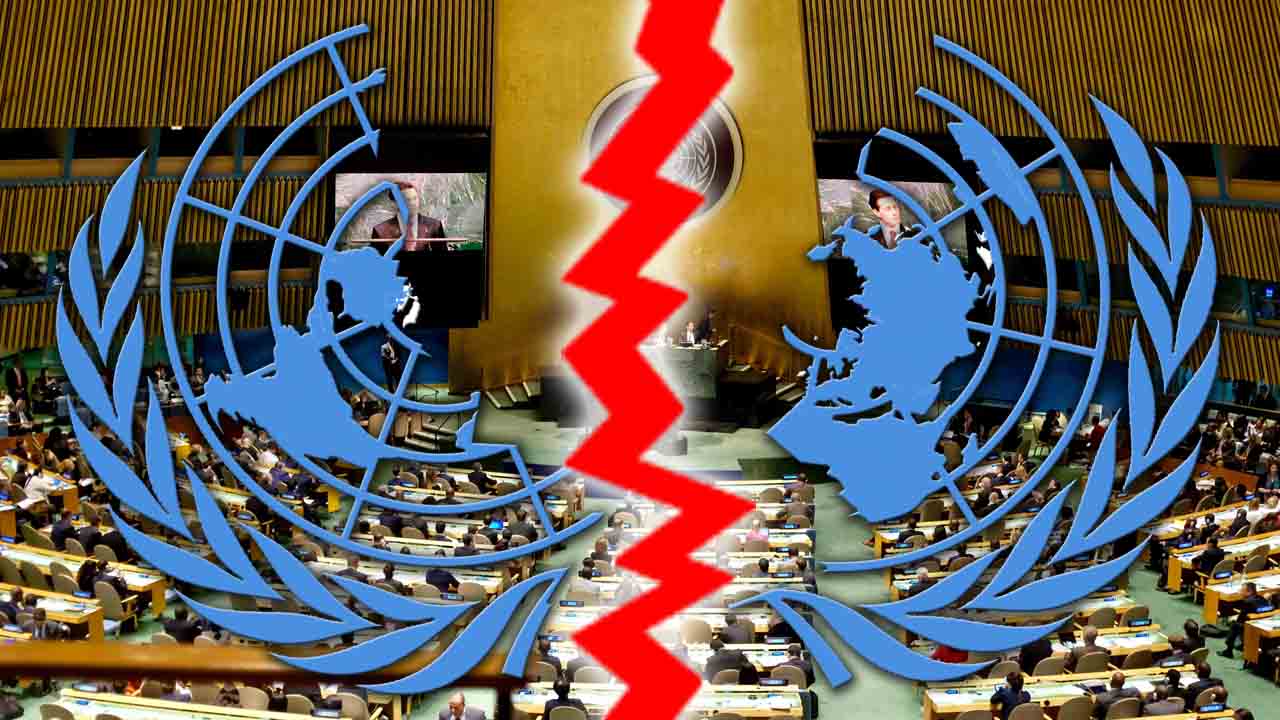 And over the many decades the United Nations assembly has been drawn into quarreling with other member states and have become dysfunctional. And the question becomes, will the United Nations organization eventually disband to be reorganized in another country? We still have some ways to go until diplomatic relations are no longer repairable and member states begin to withdraw from the UN organization, because the United States Corporation is in disarray.

And according to Thomas Paine, the United Nations at some future time will relocate to another country.

TASS – February 28, 2018: Russia is against any new initiatives proposed as substitutes for the functions of the UN Security Council and the Organization for the Prohibition of Chemical Weapons, Russian Foreign Minister Sergey Lavrov told the Conference on Disarmament in Geneva on Wednesday (February 28).

“We confirm the impermissibility of creating such non-inclusive initiatives behind closed doors with the aim of substituting for the OPCW and the UN Security Council, where it would be possible to meet comfortably with a group of close companions behind closed doors with no alternative points of view voiced to think up excuses for the policy of trying to replace the regime in Syria,” Lavrov said.

RT – January 5, 2018: By calling a UN Security Council meeting with the demand to support anti-government protesters in Iran, the US is trying to bend the UNSC mandate, which does not deal with countries’ internal affairs, the Russian envoy said.

“We obviously regret the loss of lives as a result of the demonstrations that were not so peaceful. However, let Iran deal with its own problems, especially since this is precisely what’s taking place,” Russian envoy to the UN Vasiliy Nebenzia said. Link: Read Complete Article

SPUTNIKNEWS – January 5, 2018: The Iranian government has hard evidence that the violence in the ongoing protests in the country is incited from abroad, Iranian Ambassador to the United Nations Gholam Ali Khoshroo said during an emergency UN Security Council meeting.

“We have hard evidence of the violence in Iran by a handful of the protesters, in some cases resulting in the deaths of policeman and security officers, being very clearly directed from abroad,” Khoshroo said on Friday.

Iranian Envoy to the UN Gholam Ali Khoshroo also stressed that the United States is abusing its power as a member of the United Nations Security Council and as a permanent member of the council by calling a meeting to discuss the protests in Iran.

“The move by the United States to bring to this council protests in Iran by some of our citizens for legitimate grievances some exacerbated by none other than US itself in its dereliction of its obligation under the Joint Comprehensive Plan of Action [JCPOA] is an abuse of its power as a permanent member and an abuse of the council itself,” Khoshroo said on Friday.

US cuts funding for UN, citing inefficiency and overspending

RT – December 26, 2017: The U.S. government has decided to slash its contribution to the United Nations budget, for the coming year. Ambassador Nikki Haley gave a statement, explaining the move.

US says it negotiated $285M cut in United Nations budget

YAHOO – December 25, 2017: The U.S. government says it has negotiated a significant cut in the United Nations budget. And the U.S. Mission to the United Nations said on Sunday (December 24) that the U.N.’s 2018-2019 budget would be slashed by over $285 million. The mission said reductions would also be made to the U.N.’s management and support functions.

The U.S. ambassador to the U.N. Nikki Haley said that the “inefficiency and overspending” of the organization is well-known, and she would not let “the generosity of the American people be taken advantage of.”

She also said that while the mission was pleased with the results of budget negotiations, it would continue to “look at ways to increase the U.N.’s efficiency? while protecting our interests.” Link: Read Complete Article

In general, both are NEW WORLD ORDERs. But they are not the same!!! and this has to be understood:
2. The order we will all see into 2050 AD is a Multi-polar World Order. This means that all countries will be at the decision table and contribute, mutual respect; and all countries will keep their sovereignty. This order will come about after the chaos is over and evil-doings are subdued. The United Nations in New York has become dysfunctional because of the United States, allies and the “ruling elites”, and will eventually disband. And a new UN-like organization will be located elsewhere for all the countries to gather and such an idea is already drafted and dormant – the framework is written-up for the new charter.
1. And the One World Order is where the upper tier dictatorship leader countries (i.e. the United States, United Kingdom, European Union…) under Rothschilds….control, make all the decisions to subdue and govern the other countries who are just subordinates and vassals with no sovereignty. The feud ongoing now is to destroy the One World Order platform and prevent it from becoming an influential organization. Link: Read Complete Article 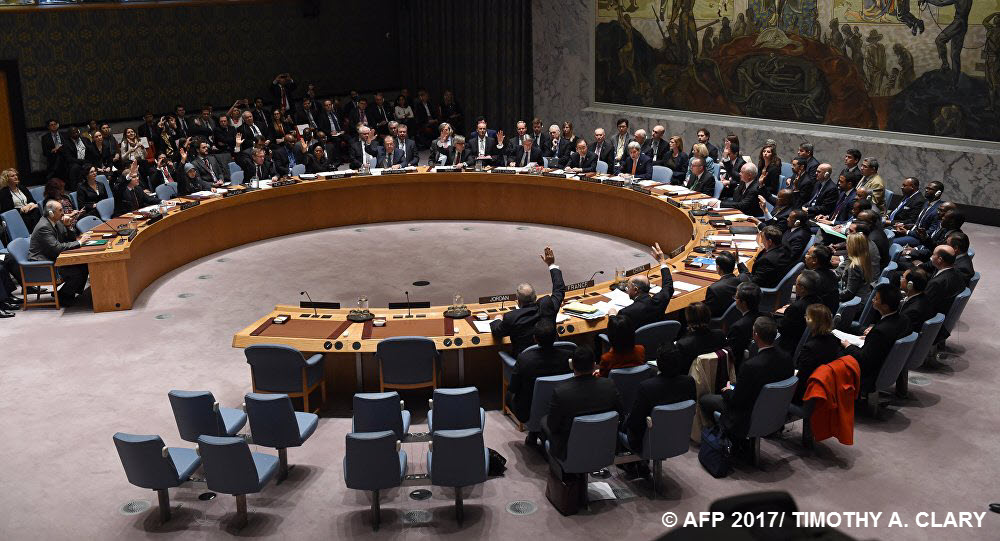 This retaliation diplomatic feud between the United States and Russia will continue for sometime, until possibly the United Nations (UN) is drawn into unsolvable quarreling and become dysfunctional where it will disband and reorganize again in another country. But we still have some ways to go for that, where diplomatic relations are no longer repairable and state members begin to withdraw from the UN organization, because the United States Corporation is in disarray. Link: Read Complete Article

BATTLEFORWORLD – December 22, 2017: The plan is now crystal clear and obvious, and so by trickery and deception, using lawyer’s tongue, The United States UN envoy Nikki Haley, by orders from the elite establishment, plans to exhaust the sanctions option on North Korea into the phase of final military attack on the country. The timeline given is 24 months – ending in the year December 2019. This will be a unilateral decision by the United States Establishment, giving the orders – if they are brave enough, because obstacles are in the way. And they will move on to their next target in the geopolitical sphere, and as always, by trickery and deception, using lawyer’s tongue. Link: Read Complete Article