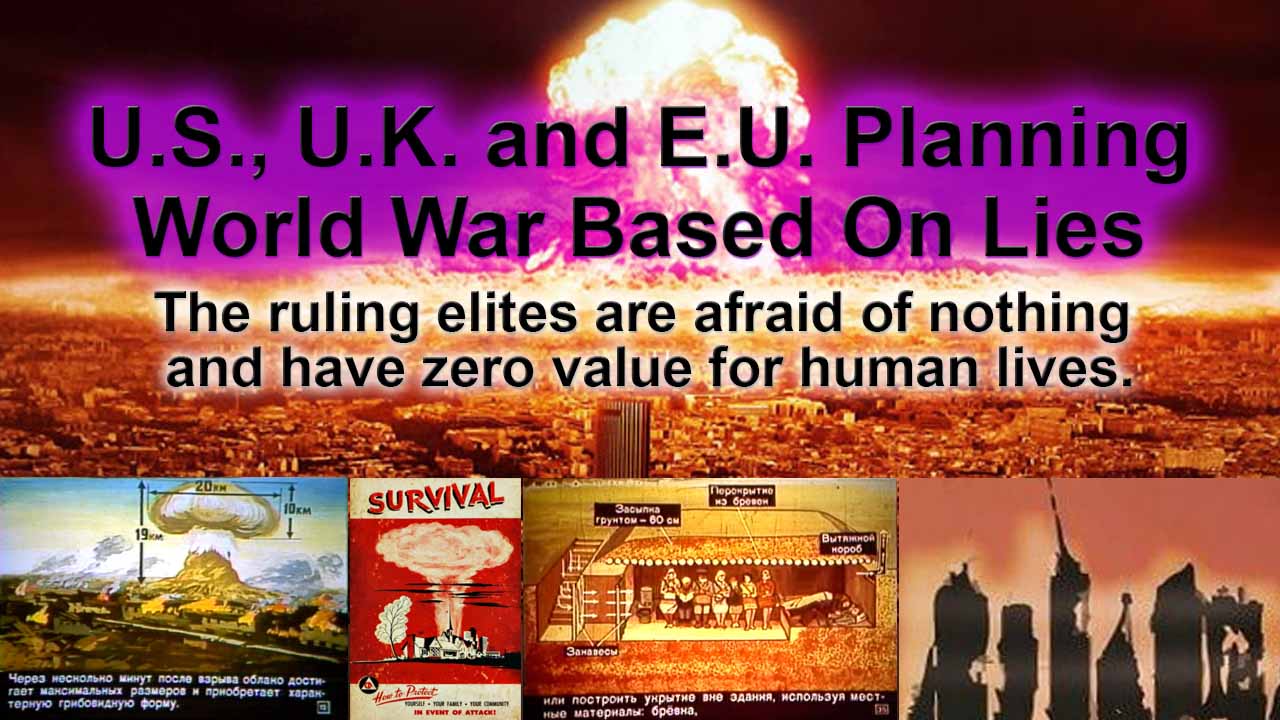 BATTLEFORWORLD – April 11, 2018: With the United States, Britain, France, etc. neoconservatives being adamant to start what could be a world war based on lies, it is time for people to refresh their memory regarding survival knowledge – food, water, shelter, etc. And as the Russian Economist Dr. Tatyana Koryagina said, the ruling elites are afraid of nothing and have zero value for human lives, as seen in Yugoslavia, Iraq, Libya, Syria, Palestine, Yemen, Africa, South America, etc.

And since the West can be unpredictable, one of Russia’s state TV has started to instruct their citizens about survival knowledge just in case the neoconservatives in the United States and Britain decide to start Armageddon in their quest for world domination under military and surveillance dictatorship.

Apparently Theresa May, Donald Trump and Emmanuel Macron are on the warpath and are warming up their nuclear weapons

THESUN – April 12, 2018: The article highlights that Jeremy Corbyn has warned the PM not to launch military raids on Syria without holding a vote in Parliament first.

The PM suggested the West now has strong proof the tyrant was responsible for a deadly chemical attack which killed dozens of innocent civilians.

And she admitted that efforts to hit back against Assad through the United Nations have failed – hinting at a more drastic response.

Speaking in Birmingham this afternoon, Mrs May said: “We are working with our allies, we have been working to get an understanding of what happened on the ground.

“We are rapidly reaching that understanding.

SPUTNIKNEWS – April 11, 2018: The General Staff of the Russian Armed Forces revealed the results of analysis of Syrian Douma soil taken immediately after the alleged chemical attack.

“As a result of the examination of the territory, the visit to the medical facility shown on the set of the White Helmets, the interview of the medical staff and the patients, neither facts of the use of poisonous substances nor injured among the inhabitants of this city were detected,” he stressed.

EURONEWS – April 12, 2018: Vladimir Chizov says the events purported to be a chemical attack in Syria’s Eastern Ghouta region were staged…

PRISONPLANET – April 12, 2018: Russia claims that the reported chemical attack in Syria last Sunday was staged by the “white helmets,” a US-funded NGO lauded by mainstream media for their humanitarian work, while long-suspected of performing less-than humanitarian deeds behind the curtain.

Speaking with EuroNews, Russia’s ambassador to the EU, Vladimir Chizov, said “Russian military specialists have visited this region, walked on those streets, entered those houses, talked to local doctors and visited the only functioning hospital in Douma, including its basement where reportedly the mountains of corpses pile up. There was not a single corpse and even not a single person who came in for treatment after the attack.”

“But we’ve seen them on the video!” responds EuroNews correspondent Andrei Beketov.

“There was no chemical attack in Douma, pure and simple,” responds Chizov. “We’ve seen another staged event. There are personnel, specifically trained – and you can guess by whom – amongst the so-called White Helmets, who were already caught in the act with staged videos.”

Russia said it sent experts in radiological, chemical and biological warfare – along with medics, in order to inspect the Eastern Ghouta city of Douma where the attack is said to have taken place.

Russia’s Defense Ministry said in a statement that the experts “found no traces of the use of chemical agents,” following a search of the sites, adding “All these facts show… that no chemical weapons were used in the town of Douma, as it was claimed by the White Helmets.”

“All the accusations brought by the White Helmets, as well as their photos… allegedly showing the victims of the chemical attack, are nothing more than a yet another piece of fake news and an attempt to disrupt the ceasefire,” said the Russian Reconciliation Center.