SPUTNIK NEWS – May 10, 2018: Southern Marylanders are expressing mixed reactions to a billboard erected in Calvert County warning liberals that they should carry firearms if they try to impeach US President Donald Trump.

“Hey liberals,” the billboard says in huge letters, “Better get your guns if you try to impeach President Trump.” Below, the message is attributed to “all of your deplorables in Calvert County.”

“I hate that billboard,” one woman who didn’t want to be seen on camera told WJLA. “I think it’s very threatening. I don’t like it at all.” Her young son finds it threatening, she added.

This billboard in Calvert County has been shared thousands of time on social media and has prompted a growing controversy. Now the sheriff’s office says the owner has agreed to change it. pic.twitter.com/RNZnH9AaZh

James Carville’s Warning to Democrats: Impeachment Could Be Just What Donald Trump Needs to Save His Presidency

BATTLE FOR WORLD / DAILY BEAST – December 19, 2018: The article highlights that James Carville is warning the Democrats that they should remember the 1998 midterm election delivering an early verdict on Speaker Newt Gingrich’s plan to turn to impeachment after the vote: Democrats gained seats in the House that November, a rarity for the party holding the White House.

Weeks after their defeat and days before Christmas, House Republicans went ahead anyway and voted to impeach Bill Clinton on one count of perjury and one count of obstruction of justice.

Clinton’s poll ratings soared, hitting 73 percent after the House vote. Two months later, in February of 1999, the Republican-controlled Senate failed to garner the two-thirds majority needed to convict. Clinton was vindicated. The partisan witch hunt was over.

(In the “enhanced”, Silent Revolution Of Truth, Compilation Edition, the free PDF book: Download and read about the special investigation court, that will attempt, to confront Trump with the connecting of Russia to electoral fraud, page 1444.  Note: Use the page number display located at top right to find the correct page. Free Book, PDF Format – Links: Book Summary | and Download Book) 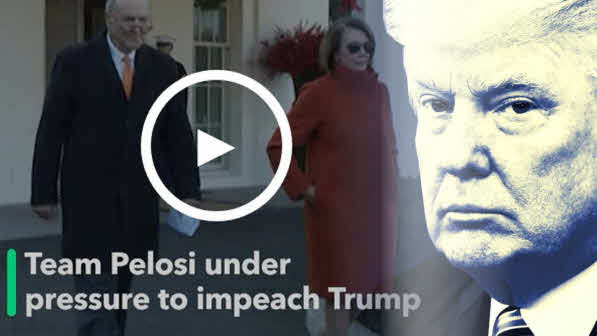 Trump Promises Market Crash in Case of His Impeachment

SPUTNIK NEWS – August 24, 2018: In an interview with Fox News, the US president has discussed the US tariffs, impeachment, his former lawyer Michael Cohen and Robert Mueller’s investigation.

“I don’t know how you can impeach somebody who’s done a great job. If I ever got impeached, I think the market would crash, I think everybody would be very poor. Without this thinking, you would see numbers you wouldn’t believe,” Donald Trump noted in the interview.

(BattleForWorld: What Trump said, sounds like what Hillary and her handlers were told during the 2016 presidential election. That “they” [the another faction of elites] are aware that the votes are being rigged and if Hillary was ever made president the stock market would crash. And the elites backing Hillary decided it was not worth it to have them lose millions of dollars.)

The president stated that he’s done a great job in office, despite the critical coverage in the media in connection with the Cohen case and other controversies.

Tucker: Dems have wanted to impeach Trump since Day 1

FOX NEWS – August 25, 2018: Tucker: If Democrats win back control of Congress in November, they will try to impeach President Trump. They’re lying when they say that’s not their intent. Democrats want to remove Trump from office because they hate him.

Do Democrats want an impeachment fight? We are headed for hellish year

WND | Patrick J. Buchanan – August 24, 2018: The article highlights: “If anyone is looking for a good lawyer,” said President Donald Trump ruefully, “I would strongly suggest that you don’t retain the services of Michael Cohen.” Michael Cohen is no Roy Cohn.

Tuesday (August 21), Trump’s ex-lawyer, staring at five years in prison, pled guilty to a campaign violation that may not even be a crime.

Would a Democratic House, assuming we get one, really impeach a president for paying hush money to old girlfriends?

(BattleForWorld: I am now convinced that this impeachment is a setup and MUST go ahead to clear Trump. And most importantly demolish persistent anti-Trump supporters in media. If Trump is to win a second term, it must be free of much of the craziness now plaguing him. The impeachment saga would also unleash forces that works in Trump’s favor.)

Hence the high-fives among never-Trumpers are premature.

Why do it? Especially if they knew in advance the Senate would not convict.

That America has no desire for a political struggle to the death over impeachment is evident. Recognition of this reality is why the Democratic Party is assuring America that impeachment is not what they have in mind.

Today, it is Republican leaders who are under pressure to break with Trump, denounce him, and call for new investigations into alleged collusion with the Russians. But if Democrats capture the House, then they will be the ones under intolerable pressure from their own media auxiliaries to pursue impeachment.

Taking the House would put newly elected Democrats under fire from the right for forming a lynch mob, and from the mainstream media for not doing their duty and moving immediately to impeach Trump.

Democrats have been laboring for two years to win back the House. But if they discover that the first duty demanded of them, by their own rabid followers, is to impeach President Trump, they may wonder why they were so eager to win it.

Giuliani: This Case Isn’t Going To Fizzle, It’s Going To Blow Up On Mueller

According to Giuliani the “real story” is that the case isn’t going to fizzle, “it’s going to blow up on them,” referring to the Mueller team.

He continued, explaining to Sean Hannity that: “The reality is, the real story is not that this case isn’t going to fizzle.” ….”It’s going to blow up on them. The real question is, what we talked about before, there’s a lot more to what they did that nobody knows about yet.”

“A lot more to the obstruction of justice, to the collusion, to the fake dossier,” Giuliani noted.

“I know some of it,” Hannity revealed.

Giuliani continued, the only collusion involved in this case is the intel community using the Steele dossier to obtain “several fraudulent FISA wires.”

SPUTNIK NEWS – August 1, 2018: President Donald Trump has for the first time directly called on Attorney General Jeff Sessions to stop the Russia probe immediately before it causes more damage to the United States.

..This is a terrible situation and Attorney General Jeff Sessions should stop this Rigged Witch Hunt right now, before it continues to stain our country any further. Bob Mueller is totally conflicted, and his 17 Angry Democrats that are doing his dirty work are a disgrace to USA!

Will the Fervor to Impeach Donald Trump Start a Democratic Civil War?

THE NEW YORKER – May 22, 2018: The highlight of the article suggests that a push to remove the President from office may lead to disaster in the midterms.

Al Green cuts a distinctive figure around the Capitol, because while most politicians call attention to their triumphs and hide their failures, Green reserves a place of honor in his congressional office for two reminders of crushing, if perhaps temporary, legislative defeats. Last year, Green—who, since 2005, has represented a district centered on Houston—sponsored the first vote in the House of Representatives on the impeachment of President Donald Trump. On December 6th, the House rejected Green’s initiative to bring impeachment up for debate by a vote of 364–58. The following month, the House rejected a similar attempt by Green, this time by a vote of 355–66.

“I didn’t come to Congress to impeach a President,” he told me. …Green understood that his call for impeachment was symbolic, but he expressed satisfaction with the number of votes he received.

Today, the impeachment of Donald Trump exists on the brink of plausibility. The sine qua non of an impeachment investigation, to say nothing of actual votes to charge and remove the President.

While Rudolph Giuliani, Trump’s attorney, may or may not be correct that Mueller believes he lacks the legal authority to indict the President, the possibility of impeachment clearly exists.

Trump supporters seem to welcome a fight over the issue. “If the Democrats move for impeachment, I think they are playing right into the hands of the President,” Anthony Scaramucci, Trump’s former White House communications director, said. Republicans believe a push for impeachment would likely be a disaster for the Democrats in the midterms.

Democrats want to shut us up by impeaching Trump when they couldn’t beat him in 2016. A powerful grassroots movement has formed in support of impeachment, a political cousin of sorts to the recent pushes for women’s rights and gun control. According to Quinnipiac, seventy-one per cent of Democrats already favor impeachment.

The purported lessons of the Clinton impeachment haunt the Trump investigation, even though the cast of characters in Congress has almost completely turned over in the two intervening decades.

Tom Steyer was to conduct what he called a town meeting in support of Trump’s impeachment, more than a hundred people had lined up outside, waiting to be admitted. Steyer has become the public face of the movement to impeach Trump.

As Pelosi told me, “Impeachment doesn’t fit into the equation until we hear what Robert Mueller says.”

Bookmaker increases chances of Trump being impeached after Putin summit

THE HILL – July 18, 2018: The article highlights that the chances that President Donald Trump will be impeached are rising, according to one Irish bookmaker, one day after Trump refused to denounce Russian meddling in the 2016 election following a meeting with Russian President Vladimir Putin.

A Paddy Power spokesman told Yahoo News that “After the carnage of the last few days, we’ve seen plenty of punters Putin money on Trump’s impeachment again — although I’m sure they’ll soon get a message, in Russian, urging them to stop.”

And that the odds of Trump’s impeachment increasing comes after his high-stakes summit with Putin in Finland, where he drew widespread condemnation for the comments he made during a joint press conference.