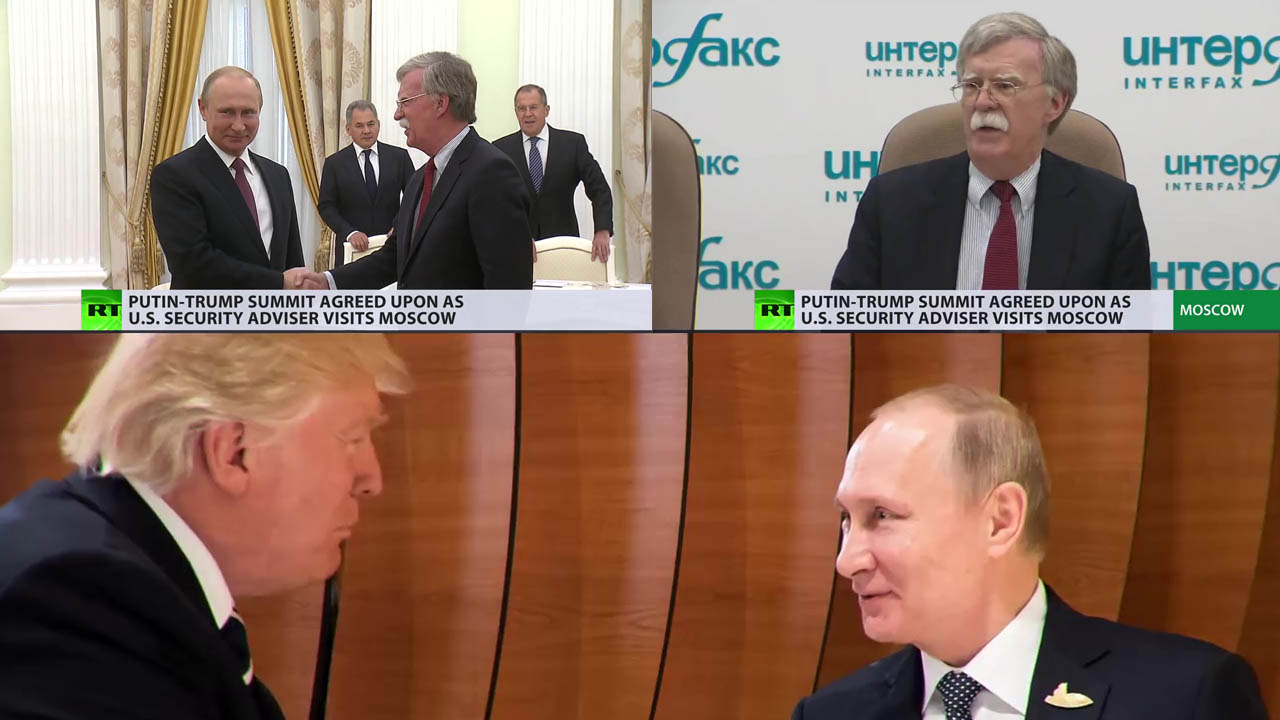 RT – July 16, 2018:The article highlights that the meeting of Vladimir Putin and Donald Trump is unlikely to result in a breakthrough, since Moscow will not ditch its “allies and friends” for the US, and Trump most likely will face a domestic backlash for getting cozy with Russia.

The face-to-face meeting between the Russian and US presidents is set to take place in Helsinki, Finland on Monday (July 16) in the afternoon. And the General Director of Russian International Affairs Council (RIAC) Andrey Kortunov, from one of the country’s top think tanks, shared his views with RT about the upcoming event.

Russia’s president is likely to resist the “temptation” to deal with the US directly, disregarding the interests of the EU, Kortunov believes, especially as tensions between Donald Trump and European leaders are soaring. Europe is still a more important partner for Russia than the United States, because they share a similar diplomatic stance on many international problems.

“It is the European Union that is Russia’s main trading partner, the main source of investment and new technologies. On a number of important issues for Moscow –the Iranian nuclear deal or the status of Jerusalem, for example– European positions are way closer to Russian than to American ones,” Kortunov told RT. “In general, European countries are more reliable and predictable partners than the US.”

“Any agreements reached in Helsinki can not only be criticized, but also “tweaked” by officials of the Washington administration, among whom there are not that many supporters of the US-Russian rapprochement. An interference by the US Congress is probable; it has repeatedly shown its desire to limit the powers of the US president in matters relating to Russia,” said Kortunov.

SPUTNIK NEWS – July 18, 2018: Both media and political backlash being thrown against US President Donald Trump for his flip-flopping antics on whether or not Russia interfered in the 2016 presidential election suggests that the Land of the Free is heading toward an authoritarian route, historian and investigative journalist Gareth Porter told Sputnik.

POTUS spent a second day Wednesday attempting to reassure critics that he’d misspoken at the Helsinki summit on Monday, telling reporters that “there’s been no president ever as tough as I have been on Russia.”

Porter told Sputnik Radio’s Loud & Clear on Wednesday that 45’s decision to walk back his statements suggests that the US is going to be heading down a road where political heads won’t be able to speak freely.

“To me, this is really the primary case study of how this political system is moving at a very rapid pace toward a rather authoritarian — very authoritarian — political caste, in which it’s going to become much more difficult to take positions that are at odds with the extremely hardline new Cold War position of the combined political media and national security elites,” the historian told hosts Brian Becker and John Kiriakou.

“There’s no doubt that 95 percent of the corporate media is partisan against Trump and in fact feels personally that he’s a menace to the United States,” he told Kiriakou. “At the same time, I think that 100 percent of the corporate media believe that it is vital to the interest of those people who they are close to in the military, the intelligence agencies and the political elites, that the United States start a new Cold War with Russia and that it be pursued to the hilt both militarily and especially in terms of intelligence and counterintelligence activities on the part of the US government.”

TASS – June 28, 2018: The visit by US presidential national security adviser John Bolton to Russia yielded the results, which both sides had expected, Kremlin aide Yuri Ushakov said on Wednesday (June 27).

The Russian presidential aide made this statement following the results of a meeting between Russia’s President Vladimir Putin and Bolton.

“We are satisfied with the exchange [of opinions] that took place. It was especially useful precisely in the context of preparing a summit meeting,” Ushakov said.

“This is actually what John Bolton’s visit was planned for and it yielded the results we had expected,” the Kremlin aide said.

NEWS TRUST – June 27, 2018: The article highlights that U.S. National Security Adviser John Bolton expected in Moscow on Wednesday (June 27) and the primary aim is to discuss a possible Putin-Trump summit. And that Bolton is to meet with the Russian Foreign Minister Sergei Lavrov and possibly with President Vladimir Putin, part of an effort to lay the ground for a summit between Putin and President Donald Trump.

The Kremlin said on Tuesday it wanted to talk about international security and stability, disarmament, regional problems and bilateral ties. It did not rule out a meeting between Bolton and Putin, but did not confirm one either.

WSJ – June 1, 2018: The article highlights about a potential meeting with Trump and Putin, and that it would bring to the international stage one of the world’s most enigmatic political relationships.

(BattleForWorld: The western press is going to twist this in every which way they can about Trump forcing Putin and giving ultimatums to the Russians to accept this and that or else war. With all the unilateralism happening on the world’s stage is the meeting pointless? – As ears are closed to compromise and peace with things moving forward into the decision of destruction and annihilation of the Earth to murder all people and vaporize all lands removing everything from existence?)

The article goes on to say that the White House is planning for a potential summit between President Donald Trump and President Vladimir Putin of Russia, according to people familiar with the efforts.

A senior administration official said Friday (June 1) that Jon Huntsman, the U.S. ambassador to Russia, has been in Washington to help arrange a meeting between Messrs. Trump and Putin.

The planning is still at an early stage, the official said, with the two nations needing to agree on a date and location.

“This has been an ongoing project of Ambassador Huntsman, stretching back months, of getting a formal meeting between Putin and Trump,” the official said.

Russia open to dialogue with US — Lavrov

TASS – June 21, 2018: Russia is open to contacts with US on all issues, but it will not react to leaks concerning the possibility of a Russian-US summit, Russian Foreign Minister Sergey Lavrov said on Thursday.

“I keep counting the leaks in Washington to the effect a summit is about to take place or a proposal for holding a summit is to follow soon. We do not react to leaks,” he said. “That we are always prepared for contacts is common knowledge.”

SPUTNIK NEWS – June 21, 2018: London is concerned about a possible meeting between US President Donald Trump and Russian President Vladimir Putin ahead of a NATO summit in Brussels. Sputnik discussed the issue with Thomas Pickering, former US ambassador to Russia, undersecretary of state for political affairs and ex-ambassador to the UN, India, Israel and Jordan.

Sputnik: What is your assessment of US-Russia relations at the moment?

Thomas Pickering: Very challenging and very difficult and to some extent this possible summit meeting, which is now seemingly on, would be a good opportunity to see if we could change the direction and indeed the pace that the US-Russia relationship is now deteriorating, and should be shifted.

RT – June 21, 2018: Speculation about whether there could be an impromptu meeting between President Putin and Donald Trump have the media rumour mills working overtime.

RT – June 21, 20178: The White House has announced that US National Security Adviser John Bolton will travel to Moscow next week, to discuss a potential meeting between Donald Trump & Vladimir Putin.