(BattleForWorld: Russia [the former Soviet Union] has been using nuclear propulsion engines, privately, for space travel to the Moon, Mars, etc. since the 1980s. They are bringing this technology into the public sector to officially launch space travel into the public consciousness.  The method they were using in the 1980s consisted of various modules that were launched into Earth’s space and configured with an attached nuclear propulsion power unit for planetary travel.)

Regarding the key component of the propulsion unit, “The works have been fully completed. The results meet the requirements of the technical specifications,” according to the information posted on Roscosmos’  website.

The tests were conducted in conditions as close as possible to outer space. The project, developed by the Keldysh Research Center from a request by the Russian Roscosmos state corporation.

The unique project developed by Russia creates a transport and energy unit on the basis for a 1 megawatt-class nuclear electric propulsion engine.

The propulsion complex includes a nuclear reactor and systems, required to produce the necessary heat, as well as for reactor control and protection of the engine. Technical solutions included in the concept of the unit will solve a wide range of space tasks, including research missions to the Moon and distant planets. 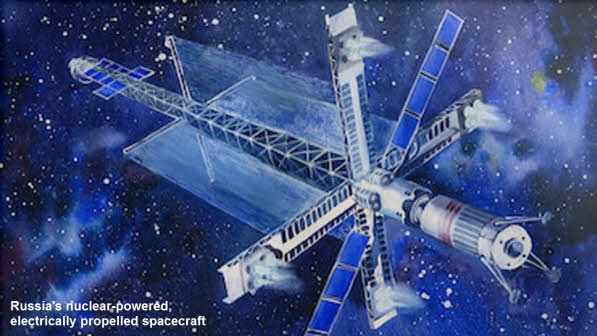 The nuclear engine, known by the abbreviation YaEDU (Nuclear Propulsion and Power Engine System) consists of a small fast-neutron nuclear reactor, an electricity generator fed by the reactor’s heat and space thrusters powered by the generator.

Unlike chemical rocket engines, which burn through their propellant in mere minutes, the YaEDU will be able to work for tens of thousands of hours before the reactor core expires. And will allow accelerating the spacecraft to much greater speeds over time. The system also works as a reliable source of power for onboard electric systems. The newly developed propulsion unit is much more efficient than traditional rockets for long-range space missions for the exploration of Mars and beyond.

The Russian space and atomic engineers have been developing, since 2009, this special space propulsion system, which uses a 1 megawatt nuclear fusion reactor as the source of energy. According to the report, one of the crucial elements of the system, which is responsible for cooling down the reactor, has been successfully tested.

This propulsion supporting component, the radiator, was remodeled by Russian engineers, creating a liquid droplet radiator. This version of the device generates a stream of droplets that collectively have a very large surface and can radiate a lot of heat into space. The droplets are then collected and pumped back into the system.

According to the report, the Keldysh Research Center, a leading Russian space lab, was the one who “created and tested prototypes of the droplet generator and elements of the collector…, [and] completed testing of the prototype liquid droplet radiator.”

RT / BATTLE FOR WORLD – November 13, 2018: The article highlights that a leading Russian space research center has posted video showing its nuclear-powered rocket, that will be able to land on Mars after seven months in flight, and can be re-launched into space several hours after landing.

And that “A mission to Mars is possible in the very near future, but that’s not an aim in itself. Our engines can be the foundation for a whole range of space missions that currently seem like science fiction,” said Vladimir Koshlakov, the head of Moscow’s Keldysh Research Center to Rossiyskaya Gazeta.

The institute, famous for developing the Katyusha rocket launched during World War II, has been developing a “unique” propulsion system since 2009 — said to comprised of a gas-cooled fission reactor that powers a generator, which in turn feeds a plasma thruster. 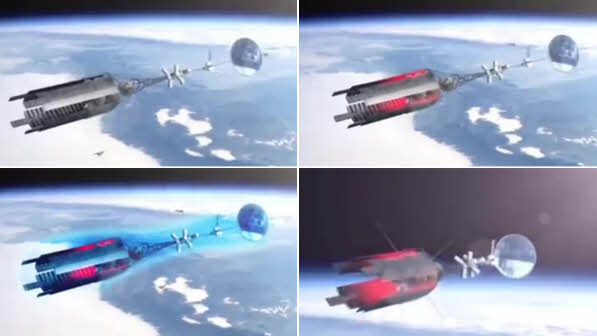 According to Koshlakov, a scientific researcher specializing in heat transfer and mathematic modelling, “We must develop engines that do not need to be fine-tuned or repaired more than once every ten flights. Also, 48 hours after the rocket returns from space, it must be ready to go again. This is what the market demands.”

“Elon Musk is using the existing tech, developed a long time ago. He is a businessman: he took a solution that was already there, and applied it successfully. Notably, he is also doing his work with help from the government,” concluded Koshlakov in the Rossiyskaya Gazeta article about Russia’s space ambition to Mars.

AFP / BATTLE FOR WORLD – November 13, 2018: The article highlights that the US space agency believes it can put humans on the Red Planet within 25 years, but the technological and medical hurdles are immense.

The cost of solving those means that under current budgets, or slightly expanded budgets, it’s going to take about 25 years to solve those,” said former NASA astronaut Tom Jones, who flew on four space shuttle missions before retiring in 2001.

(BattleForWorld: Former NASA astronaut Jones brought up an interesting point about budget funding as this is crucial for mission planning and research to go ahead in order for the United States to launch a future mission to Mars. The reader can refer to pages sighted in the free-PDF for more information about a future Mars flight.)

(In the “enhanced”, Silent Revolution Of Truth, Compilation Edition, the free PDF book: Download and read about the future flight to Mars prediction and the problems the United States will face at that time, pages 1480 and 1479. Note: Use the page number display located at top right to find the correct page. UPDATED, PDF Format – Links: Book Summary | and Download Book) 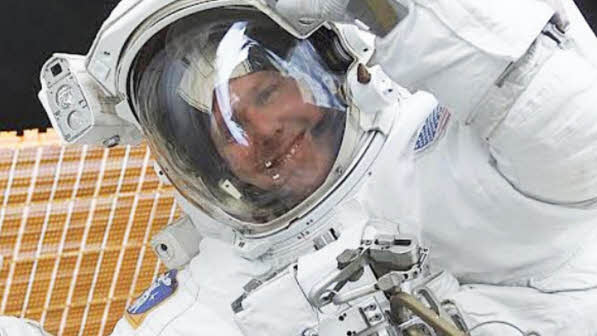 “We need to get started now on certain key technologies,” he emphasized to reporters in Washington.

At an average distance of about 140 million miles (225 million kilometers) away from planet Earth, Mars poses scientific problems an order of magnitude greater than anything encountered by the Apollo lunar missions.

The former NASA astronaut said that: With today’s rocket technology, it would take an astronaut up to nine months to reach Mars — the physical toll of floating that long in zero gravity would be huge. And calls for nuclear propulsion systems that would have the added benefit of producing electricity on flights.

“If we start now, in 25 years we might have these technologies available to help us and protect us from these long transit times,” he said at the news conference.