BATTLE FOR WORLD / NPR | October 10, 2019: In the Silvies Valley Ranch in the remote eastern region of Oregon five young purebred bulls mysteriously showed up dead this past summer, with their blood drained and body parts surgically removed with precision.

Colby Marshall, the vice president of the ranch, drives his truck down the nearby U.S. Forest Service road and said to the reporter “…we’ll get out and take a little walk to where one of the bulls was found. And the carcass is still there.”

Seeing one of the dead bulls is an eerie scene. The mutilated bull’s body looks like a giant deflated bag, smelling. Around the body there are no signs of hawks, coyotes or other scavengers. The animal’s red coat shiny with its body bloodless, tongue and genitals surgically cut out.

Marshall said the livestock were young and just reaching their top value as breeding bulls, worth around $6,000 each. As breeding bulls they were worth hundreds of thousands of dollars’ and so future calves were lost too.

Since the incident ranch staff members are now required to ride in pairs with some carrying arms.

Investigating the the mysterious cattle cases is Harney County Sheriff’s Deputy Dan Jenkins, who has gotten dozens of calls from all over the country offering tips and suggestions. With “A lot of people lean toward the aliens” scenario. “One caller had told us to look for basically a depression under the carcass. ‘Cause he said that the alien ships will kinda beam the cow up and do whatever they are going to do with it. Then they just drop them from a great height.”

From his whiteboard with marker cross-outs, what’s clear: It isn’t bears, wolves, cougars or poisonous plants; nor were the animals shot.

Later in the case it was revealed that two years ago (2017) and 200 miles south, near New Princeton, Oregon, one of Andie Davies’ cows was also found cut up with its blood drained.

The FBI will not confirm or deny that it’s looking into the mysterious slaughter of multiple bulls.

Another rancher Terry Anderson told of an incident that happened in the 1980s where one of his mother cows was mysteriously killed overnight near Pendleton, Oregon, and points to the exact location where he found her on top of a mountain, the cow lying dead, her udder removed with some type of sharp razor, the blood drained from its body.

The media has imprinted into the minds of the population that aliens are behind cattle mutilation. And the term aliens implies off-planet beings visiting the Earth. But there’s no truth regarding the answer that the media perpetuates.

In the late 1970s a “clone war” erupted in the intelligence community around the time when Jimmy Carter was president of the United States.

The war was between three groups, the CIA Rockefeller faction, a Rothschild associate faction and a group from Europe.

During that time, the political situation in the United States was in chaos because the ruling elites were trying to puppet many politicians in Washington DC to push their agenda.

The Rockefeller cloning method was not fully functional at the time. The Rothschild group gave cloning technology developed in France to a new group, the Bolsheviks, that had immigrated from the Soviet Union into the United States with the help of the Rockefellers.

The cloning technology funded by the Rothschild group in France uses as a starting point animal parts and blood. Watch the movie “6th Day” and you will pretty much get an understanding of the Rothschild method without the beginning steps where the animal parts and blood are processed and used to culture, grow and nourish cells…the egg…into fetus, etc.

Young animals are preferred because their cells are vibrant. And the less chemicals the animals have in their body the better. What the article did not mention is that the ranches at “Silvies Valley” specialize in organic ranching. And the US faction behind this modern day cattle rustling is obviously aware of this.

Not all the clique groups maintain technical facilities, they setup to carryout an agenda, then shutdown. Some equipment are sent off to storage and some destroyed; this operation is cheaper. And into the early 1980s the cloning process had very much improved by the factions who maintain research facilities.

Political Crisis in the United States

Given the political climate now in Washington DC, one can understand how clones can become useful. The world is very close to nuclear war and it’s unknown if cloning operations are being restarted to gain an advantage, calm things down from war-footing or inflame things further to bring about the dreaded war.

The cattle mutilation reporting is also being used to imprint into the minds of people things about bad aliens, that will be used when an alien invasion plot is scripted and put into action. 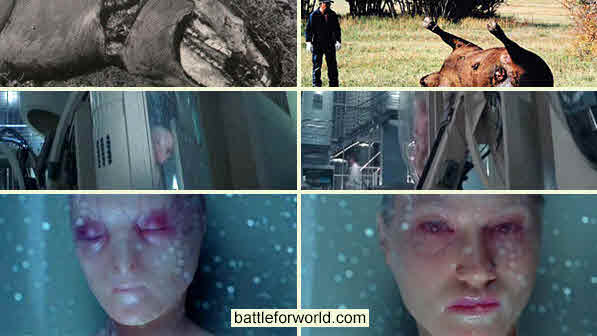