Civil unrest on the rise in America

BATTLE FOR WORLD | September 26, 2020: The U.S. government, state governors and activists are warning about the possibility of civil unrest in various parts of the United States.

As days go by with media, pundits, activists and groups stirring the disorder of volatile cocktail ingredients as segments of the population fight over the presidential election, racism, abortion, the coronavirus chaos, etc. coupled with calls to action by social media, in a time of stress during the pandemic is causing many people to go unhinged.

The state of Portland, Oregon is already suffering from fires and protests as unrests continue between right and left wing activists, and adding fuel to the conflict are “far-right groups from around the country bringing guns, flags, bulletproof vests,” according to a report from the N.Y. Times.

From Facebook to YouTube to the U.S. military precautions and preparedness are being taken for post-election civil unrest exploding as Democrats and Republicans voice all sorts of craziness. 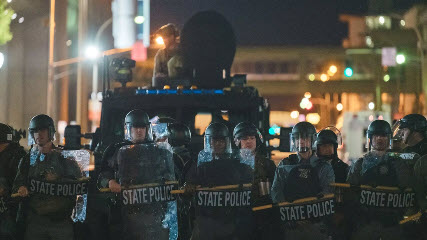 State Police on duty in the United States.

BATTLE FOR WORLD | September 26, 2020: Two groups often linked to the Democratic party, the KKK and Antifa, and with civil unrest spreading throughout the United States, President Donald Trump has announced plans to designate them as terrorist organizations on Friday (Sept. 25), an idea he has voiced since 2019. And it is expected he would make this happen through executive orders.

Trump even posted a tweet on his Twitter page saying “The United States of America will be designating ANTIFA as a Terrorist Organization,” at the end of May (2020).