BATTLEFORWORLD.COM | March 18, 2021: A US intelligence report lashed out accusations at Russia’s President Putin, saying that he “probably” directed a disinformation campaign against Biden undermining the 2020 presidential election. And in a CNN interview President Biden said if he established that this occurred, Putin should be prepared. When asked if Putin is a killer Biden replied, “I do”. George Stephanopoulos then asked, “what price must he pay?” And Biden said, “the price Putin is going to pay you will see shortly.” (BattleForWorld.com foretold some of the things to expect from the Biden administration, here.)

President Putin replied the following day Thursday (March 18) saying that Biden may be projecting, noting that evaluating other countries “is like looking in a mirror.” – “When I was a kid, when we were arguing with each other in the playground, we used to say, ‘Whatever you say [about others] is what you are yourself,'” said Putin. And further added that Washington is “determined” to have a relationship with Moscow, but only on “issues that are of interest to the United States itself.” – “Even though they think we are like them, we are different people. We have a different genetic and cultural and moral code,” he said.

(BattleForWorld.com: Jacob Rothschild said, “quite frankly places like China and Russia will only continue to feel the abuse of our [foreign policy] powers being exercised by favored nations like the US, the UK, and Israel.” Article, here. So, no matter whomever the US president is, be it Bush, Clinton, Obama, Trump, Biden, etc. the foreign policy abuse dictated by the ruling elites remain the same.)

President Putin later said on Thursday at a meeting with the public of Crimea and Sevastopol, the Black Lives Matter movement emerged because of a genocide that followed the entire US history. That “European’s settlement of the American continent was followed by the elimination of the local population, with genocide as they call it today, direct genocide of the Indian tribes. It was followed by a very harsh, large, difficult period of slavery, very brutal,”  “Otherwise, where would the Black Lives Matter movement come from? […] African-Americans face injustice up to this day,” said Putin to the Washington DC establishment.

(In the Silent Revolution Of Truth, Compilation Edition, Volume 2, the free PDF book: Download and read about the majority of those worthless state-leaders, misleading of the majority of the populations – and how the people vote for them believing that these leaders are going to do good; the populations are kept like a kind of state-slaves, page 922. A worldwide-planned-murdering of certain peoples would come about, by this genocidal extermination, like that with Hitler, page 953.  The powerful elite planning a massive genocide, page 616.  The populations are being experimented on, page 965. Note: Use the page number display located at top right to find the correct page. Free Book, PDF Format – Links: Book Summary | and Download Volume 2 Book)

(In the Silent Revolution Of Truth, Compilation Edition, Volume 1, “enhanced”, the free PDF book: Download and read about the extermination of the Indians and demanding hundreds of thousands of human lives worldwide, page 1148. America slaughtered the natives, the red human beings, – and rob in the continent of Africa, the human beings of different black races living there, page 1256. Note: Use the page number display located at the top of the page to find the correct page. Free Book, PDF Format – Links: Book Summary | and Download Book – Volume 1)

President Richard Grenell? Is Joe Biden on his way out?

BATTLEFORWORLD.COM | March 20, 2021: In a Google search, some hours ago, Richard Grenell, the Trump administration’s former acting director of national intelligence, was written up as the is now acting president of the United States….

Multiple results by Google listed Grenell as the current US president on Saturday (March 20), claiming that he took over the position from President Joe Biden “since 2021” – but no month was given regarding when the title was assigned. Strangely, further searches for “President of the United States” also returned Grenell’s name alongside Biden’s.

The information, said to be false, appeared to come directly from Wikipedia, which Google automatically uses in its searches to often state something as fact.

The mistake was quickly mocked on social media and Grenell himself also commented, amusingly issuing a series of ‘Executive Orders’ as well as referencing Biden’s accident on the stairs, falling three times, as he walked up to Air Force One this week. 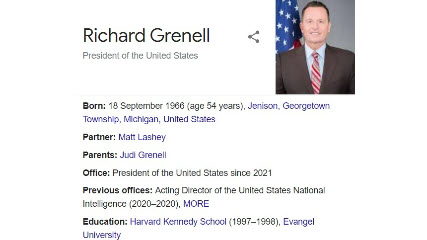