BATTLEFORWORLD – August 18, 2016 (Updated September 4, 2017): Before the attack and destruction of the World Trade Center on September 11, 2001 happened, a Russian economist, Dr. Tatyana Koryagina in an interview published in the Russian language edition of Pravda on July 12, 2001, detailed a scenario that was ominously prophetic, and most likely came from intelligence sources, about a looming disaster being planned for the United States. 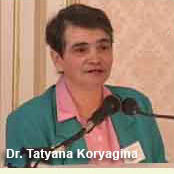 The Russian State Duma in early July 2001 convened a conference entitled, “The measures to provide for the development of the Russian economy in the environment of destabilization of the world’s financial system.” So evidently, Russian officials had intuition regarding troubles that were ahead.

At that conference Dr. Tatyana Koryagina, a senior research fellow at the Institute of Macroeconomic Research an advisory to Russian Ministry of Economic Development, made a statement at the end of the Duma hearings, saying – as a Russian expert in the shadow economy, shadow politics…etc.

The theme of the Duma hearings was the forthcoming economic crash of the United States. The discussion focused on preparing recommendations for President Putin as to what steps Russia should take to soften the consequences of this coming catastrophe.

Participants at the Duma hearings stated that America is a colossal financial pyramid, on the verge of crashing soon. And that it was difficult to understand how this could happen to the richest country in the world – without a war, without missile or bomb strikes.

The following is an English translation excerpt from the July 12, 2001 Pravda interview:

Koryagina: Besides bombs and missiles, there are other kinds of weaponry, much more destructive ones…

Pravda: Well, economic theory. But how is it possible for you to give an exact date for the U.S. crash – August 19th?

Koryagina: The U.S. is engaged in a mortal economic game. The known history of civilization is merely the visible part of the iceberg. There is a Shadow Economy, Shadow Politics and also a Shadow History, known to conspiratologists. There are unseen forces acting in the world, unstoppable for the most powerful countries and even continents. (BATTLEFORWORLD: Shadow Economy where “Wall Street” and the “City of London” are deeply involved; and the Shadow Politics are controlled by the Ruling Financial Elites; and the Shadow History is about the secrecy to dominate and rule the world. The popular One World Order ideologues are Zbigniew Brzezinski, Madeleine Albright, Henry Kissinger, etc. And Henry Kissinger cannot be allowed to die, at least not yet, because he’s such a deep fixture in the Shadow History because he knows a lot about the mission and the endgame, working on behalf of the Ruling Elites.)

Pravda: These forces intend to smash America on August 19th?

Koryagina: There are international, “super-state” and “super-government” groups. In accordance with tradition, the mystical and religious components play extremely important roles in human history. One must take into account the shadow economy, shadow politics and the religious component, while predicting the development of the present financial situation.

Pravda: Still I don’t understand what could be done to this giant country [the U.S.], whose budget is calculated in the trillions of dollars.

Koryagina: It is possible to do anything to the U.S. … whose total debt has reached $26 trillion. Generally, the Western economy is at the boiling point now. Shadow financial actives of $300 trillion are hanging over the planet. At any moment, they could fall on any stock exchange and cause panic and crash. The recent crisis in Southeast Asia, which touched Russia, was a rehearsal.

Pravda: What is the sense of smashing just America?

Koryagina: The U.S. has been chosen as the object of “financial attack” because the financial center of the planet is located there. The effect will be maximal. The strike waves of economic crisis will spread over the planet instantly, and will remind us of the blast of a huge nuclear bomb. (Editor: The September 11, 2001 terrorist attack in America was the start of the “Financial Attack”, which gave motion to the Terror War using radical Islam ideology to spread war chaos all over the planet. The United States economy is in destructive mode and cannot be easily fixed. The Terror Wars are being used to buy time…by destroying as much as possible, as hinted by the former U.S. Secretary of State Condoleezza Rice to the then Iraqi Minister Hazim Al-Shaalan [aired on RT Arabic television May 27, 2016]. Where much of everything is destroyed by the shadow forces to start anew, because within the current financial system they have manipulated economies and politics beyond repair.Rice later admitted that the “US Invaded Iraq To Oust Saddam Hussein, Not To Bring Democracy”. And the United States has been running a Ponzi scheme through the issuance of dollars, creating trillions of dollars worth of debt that they LINK TO ACTS OF FOREIGN POLICY AGGRESSION, to scare/panic investors out of other economies into U.S. dollar securities, like the U.S. Treasury Bond. And this is what the Terror Wars are all about; why the U.S. invaded Iraq; harassing North Korea and stirring up fearmongering into eventual war, and the reason for the U.S. hostile policy toward Iran…  The U.S. Terror War foreign policy creates the environment to get all these dollars that are overseas to PANIC into coming back into the U.S., buying treasury bonds to keep the U.S. Treasury rates low, because low interest rates allow the U.S. to issue more debt, more debt, more debt, etc. When the U.S. is unable to sell new treasury bonds it forces the regular stock market to panic-plunge, a code-action to the power-investors to buy more U.S. bonds and after goals are met the stock market manipulator is signaled to go up.)

Pravda: Did Russia’s crisis of 1998 have this religious-mystical component?

Koryagina: . . . The Russian crisis of 1998 was preconditioned by internal factors. Yeltsin’s policy enlarged its consequences. Now we have President Putin, and this is a good choice. (BATTLEFORWORLD: Yeltsin was installed by the United States financial bankers. The Russian Secret Faction defending mother Russia kept a watchful eye on Yeltsin and saw that his policies were pillaging Russia in the interest of the United States. When they saw the real intentions of the US unfolding inside Russia, they went to work to shut-down the Western-backed oligarchs. And that is why the United States dislikes Russia and work against the country with ill intentions to this very day.)

Pravda: What do we have to do now?

Koryagina: Recommendations, compiled by the Duma Commission of Economic Politics after the recent Duma hearings, offer instruction on what should be done to escape the consequences of a world crisis inspired by a financial catastrophe in the U.S. This document will be sent – or has already been sent – to President Putin.

Pravda: What should Russian citizens do?

Koryagina: They should start changing their dollars for Rubles. President Putin and the Russian Central Bank are already taking the necessary healthy measures. There are high chances that after 19th of August the Ruble will become a very good currency. (BATTLEFORWORLD: But the U.S. and its allies started to launch “Economic Warfare” on Russia to weaken the Ruble and destroy their economy by decreasing the price of oil and using Ukraine to agitate Russia so that the West can apply sanctions. And as Koryagina said, this Powerful Group is afraid of nothing and have zero value for human lives, as seen in Yugoslavia, Iraq, Syria, Palestine, Yemen, Africa, South America, etc.)

Koryagina: Some fluctuation in this date is possible. Serious forces are acting against those who are now preparing the attack on the United States. August, with very high probability, will bring the financial catastrophe to the U.S…. The last 10 days of August have especial importance from a religious-sensible point of view. (BATTLEFORWORLD: The September 11, 2001 terrorist attack in America did not go 100% percent according to plan because counter forces were activated to soften the blow.)

After the September 11, 2001 terror attack in America, Pravda did another interview with Dr. Koryagina, in summary:

The Pravda article was titled “Who Will Strike America In Its Back?”

Koryagina: New Strikes Will Come – in the near term, the powerful group that masterminded the events of Sept. 11 will make new strikes against America – of a financial nature and otherwise. They will strike America in the back. Americans are consolidating around their government and preparing retaliatory strikes against the “terrorists.” But the Americans are trembling about spending. They will understand after the upcoming new strikes that their government can guarantee them nothing; they will panic – causing a collapse of their financial system. (BATTLEFORWORLD: This means that the Ruling Elites will continue to panic the financial markets [stocks and bonds], until the financial markets become exhausted and thus the system will collapse worldwide. And one of the mechanisms to panic the financial markets is North Korea – The Reason Behind The United States Mischief With North Korea – America-China Financial Wars)

I did not make a serious mistake (in my forcast), because between August 15 and 20, the dollar started trembling under the pressure of multiple bad news about the U.S. and world economy. And within weeks, the Manhattan skyscrapers fell down. As a result, a significant part of the world financial network was paralyzed. This strike was aimed at destabilization and destruction of America and all the countries, in domino fashion, that are making countless billions of dollars.

The Powerful Group behind these strikes; the U.S. is painting a false picture. (BATTLEFORWORLD: Blaming Islamic terrorists for “masterminding” the Sept. 11th attack on the World Trade Center and the Pentagon, but this is not the truth.) The operation was not the work of 19 terrorists, but a larger group seeking to reshape the world. A group of extremely powerful private persons, with total assets of about $300 trillion, intends to legalize its power and to become the new world government. The Sept. 11 strikes showed that this group is afraid of nothing – human lives have zero value for them.