BATTLEFORWORLD – December 22, 2017: The plan is now crystal clear and obvious, and so by trickery and deception, using lawyer’s tongue, The United States UN envoy Nikki Haley, by orders from the elite establishment, plans to exhaust the sanctions option on North Korea into the phase of final military attack on the country. The timeline given is 24 months – ending in the year December 2019. This will be a unilateral decision by the United States Establishment, giving the orders – if they are brave enough, because obstacles are in the way. And they will move on to their next target in the geopolitical sphere, and as always, by trickery and deception, using lawyer’s tongue.

The new resolution was drafted by the US in response to the most resent ballistic missile test conducted by Pyongyang on November 29. The final document did not incorporate the harsher restrictions sought by the US, which included a total ban on exporting oil products to North Korea, as well as freezing all the international assets of the country’s leadership. 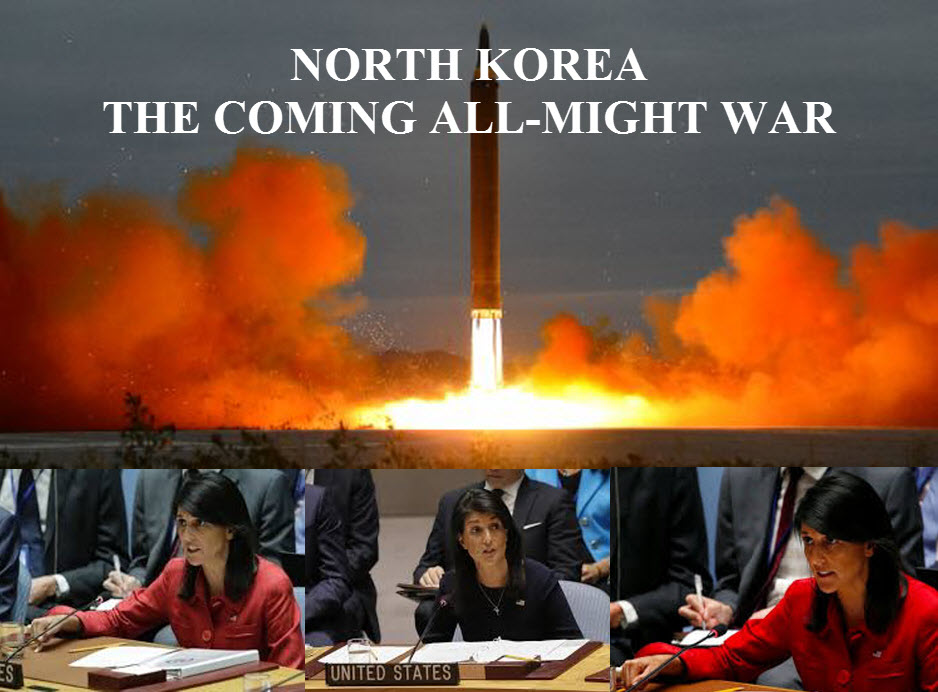 North Korea said it was a new type of intercontinental ballistic missile, the Hwasong 15, which can hit all of the US mainland. The US military dismissed the claim, with Defense Secretary James Mattis stating, “It has not yet shown to be a capable threat against us right now.”

“It (the resolution) sends the unambiguous message to Pyongyang that further defiance will invite further punishments and isolation,” Nikki Haley, the US envoy to the United Nations, said following the vote. Link: Read Complete Article

“It’s no secret to anybody that the DPRK nuclear missile problem is, in fact, being used as a pretext for continuing the militarization of the Asia-Pacific region in the interests of containing Russia and China,” Russian Security Council Secretary Nikolai Patrushev said in an interview with “Argumenty i Fakty” (Arguments and Facts) newspaper.

According to him, Washington “consistently realizes its plans to deploy elements of its global missile defense system in the countries of the region.”

Patrushev went on by saying that in case of war on the Korean peninsula, the United States would have to respect the lives of US citizens living in South Korea.

“As history shows, the US is not accustomed to respecting the lives of citizens of other states to achieve its goals. However, Washington will certainly take into account the fact that there are 250,000 Americans living in South Korea,” Patrushev said, adding that in case of large-scale military operations on the Korean peninsula, their lives will be under threat.

“And such losses in the language of the military of all countries of the world are deemed unacceptable. The positions of missile systems with operational and tactical missiles, barrel artillery and missile systems with the volley fire of North Korea are at a distance of some 50 kilometers from Seoul,” he stated. Link: Read Article

The invasion of North Korea by the United States pending

BATTLEFORWORLD – October 16, 2017: The invasion of North Korea by the United States using Kim Jong-un missile-launching behavior as pretext. And China and Russia won’t sit idly by as this happens. When the US invades North Korea, it is going to try and take as much land area as possible using all sorts of tricks. Another geopolitical war that will end up badly and prolonged like that of Iraq, Libya, Syria, Yemen, etc. Link: Read Complete Article

APNEWS – December 22, 2017: “Storm clouds are gathering” over the Korean Peninsula, Defense Secretary Jim Mattis declared Friday. And as diplomats try to resolve the nuclear standoff, he told soldiers that the U.S. military must do its part by being ready for war.

Without forecasting a conflict, Mattis emphasized that diplomacy stands the best chance of preventing a war if America’s words are backed up by strong and prepared armed forces.

“My fine young soldiers, the only way our diplomats can speak with authority and be believed is if you’re ready to go,” Mattis told several dozen soldiers and airmen at the 82nd Airborne Division’s Hall of Heroes, his last stop on a two-day pre-holiday tour of bases to greet troops.

SPUTNIKNEWS – December 23, 2017: As Pyongyang digs in its heels and Washington continues its threats, global experts suggest that new UN sanctions against North Korea will not have the desired effect, only increasing the possibility of nuclear conflict in the region.

Korean expert Zhao Tong with the Tsinghua Carnegie Centre in Beijing suggested that any new sanctions only serve to increase the rhetoric of war in the region.

“The US has said that it won’t acknowledge Pyongyang as a nuclear power,” he pointed out, adding, “if the negotiations and sanctions fail to work and neither side backs down, war is inevitable.” Link: Read Complete Article

RT – December 21, 2017: South Korea’s military has unleashed around 20 warning shots in the direction of North Korean border guards in the Demilitarized Zone (DMZ) who were pursuing a defector, Yonhap reports. Earlier Thursday, a “low-ranking” North Korean soldier fled across the border, appearing in front of a guard post on the “mid-western front” at around 8:04am local time, the Joint Chiefs of Staff (JCS) said. This is the fourth such defection this year. Link: Read Article

RT – December 22, 2017: The Russian S-400 Triumph missile anti-aircraft system was activated in the Primorsky region of Russia on Friday, at the border with North Korea. The system is aimed at destroying aircraft, ground targets and ballistic and cruise missiles.

THESUN – October 16, 2017: An elite assassination squad with a mission to take out Kim and his henchmen has reportedly arrived on the Korean peninsula to await orders to strike.

The highly-trained Navy Seals “Decapitaton Team” has teamed up with the US and South Korean navies to take part in drills close to Kim’s kingdom, according to the Daily Star.

The Maritime Counter Special Operations Exercise will simulate an attack on North Korea in a move which is bound to fire up Kim, who called earlier exercises on the peninsula a “blatant act of war”.

(BATTLEFORWORLD: And China is keeping a watchful eye to make sure that if and when the US invades North Korea, it does not go too far like what happened in Iraq, Libya and Syria. We all know how those invasions turned out – messy, but maybe that was the plan.) Link: Read Complete Article

SPUTNIKNEWS – January 15, 2018: The international pressure campaign against North Korea will continue until Pyongyang makes a decision to fully denuclearize, US Secretary of State Rex Tillerson said during a Foreign Ministers’ Meeting on Security and Stability on the Korean Peninsula on Tuesday.

“The pressure campaign will continue until North Korea takes decisive steps to denuclearize,” Tillerson said. “This is the strategy that has and will require patience.”

The United States, Russia, China and the rest of the world does not recognize the DPRK as a nuclear power. This was stated on Tuesday by US Secretary of State Rex Tillerson at a summit in Vancouver, chaired by Canada and the US, where the Foreign Ministers of 16 states will discuss the situation around the DPRK.

“We all must insist a full enforcement of UN Security Council Sanctions as this is the letter of the law. We especially urge China and Russia in this matter,” Tillerson said. Link: Read Complete Article