BATTLE FOR WORLD – September 2, 2018: Into July and August, if you are on Satellite TV such as DISH or DirecTV, there was a lot of outage about signal lost even with clear skies. The situation became more problematic/intermittent for DISH making their TV service unwatchable. The problem cleared up in about mid-August but only for a few days and returned to unwatchable service during the day with a little clearing up at night. DirecTV had signal loss that often blocked out the RT channel, with other channels available.

The Russian TV channel RT (Russia Today) is available on DISH and recently on DirecTV. So it appears that an entity was disrupting the RT channel satellite signal and was given an answer – retaliation.

According to Q’s postings:

The picture of what was going on in the skies can be better understood. 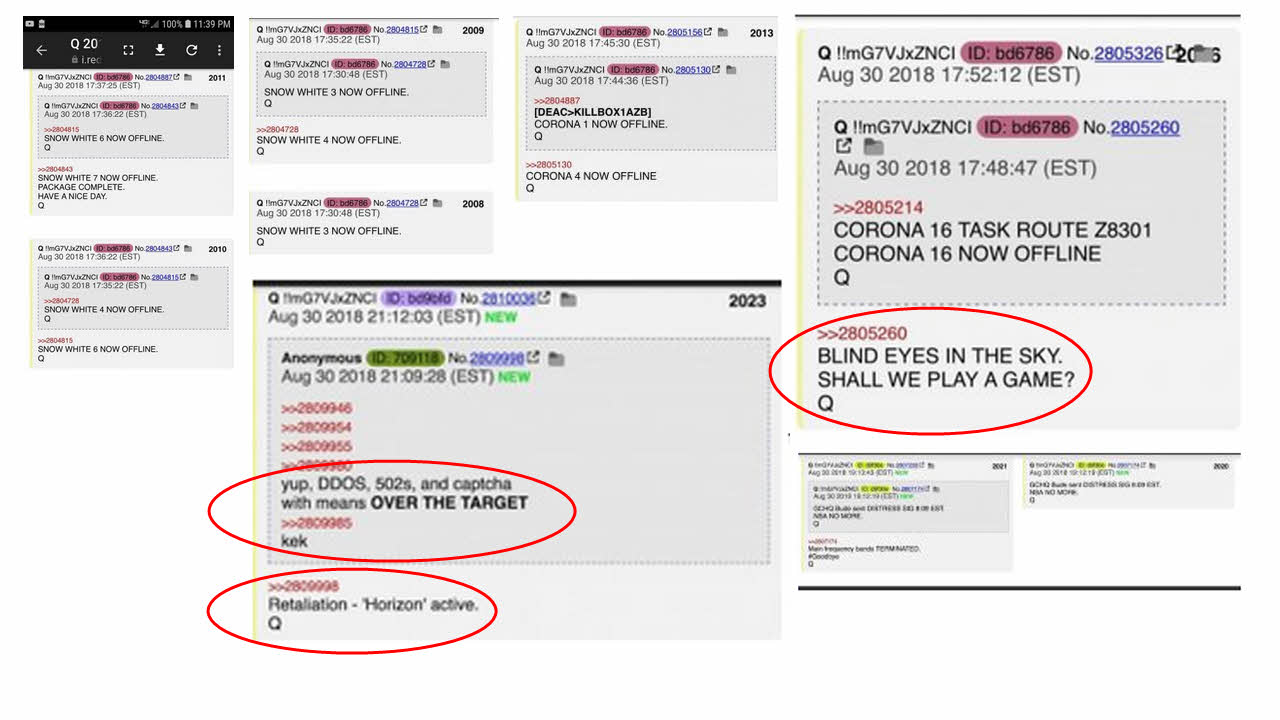 Exposed – Creator of QAnon Speaks for the First Time

ONE AMERICA NEWS NETWORK – September 5, 2018: An online conspiracy group called QAnon is being debunked by one of the group’s founders. One America’s Jack Posobiec spoke with one of the former top members of the group and has this exclusive.

A. Clark:
Lmmfao Q is real. I’m Q. Oh Jack Plebsobic is a fraud. All information I am fixing to give can be verified. Jack’s Job at naval intelligence was to give fitness and piss test. When he was privy to American Intelligence he leaked on Twitter. Sound familiar. Sounds like the very things he complaining about on here. Brennen, Comey KURU KILLARY. All leaking Americans security. Like I said all this information can be verified. I believe that when people go find it for themselves they tend to be more open to it. GOD BLESS AMERICA and God bless President Trump. WWG1WGA!! As far as Q being a Hoax I have not seen him show anymore evidence than what CNN would. I saw that press conference with Sarah and she didn’t denounce anything. Can be verified. All this week reporting is easier to bebunk than flat Earth.

Morgan Lori:
This guy isn’t Q and hasn’t proved that even could be. The media is trying to discredit Q and his followers and I am profoundly disgusted by this “story”. May not ever watch OAN again.

TheUnkBoogie:
Jack does not speak for anyone. Sad to see OAN taking the bait and become one of the mainstream media gang. I had high hopes for you OAN..sad. Jack, the truth community knows what your about.

Foxxy Loxxy:
Oh I get it! We’re supposed to believe this Jack person, who interviews someone with a fake name and disguises his voice? This is real on the spot reporting! I thought OAN was better than this. Jack is a larp!!😳