BATTLE FOR WORLD / DAILY STAR – December 22, 2018: The article highlights that human thoughts could be watchable on TV screens and that the technology is some years away, an AI expert has claimed.

Futurologist Dr Ian Pearson believes a helmet placed on a human head in a laboratory will be able to project their thoughts visually in real-time using an electronic interface connected to the helmet.

He spoke after researchers claimed they can tell what rats are thinking by analysing activity in their brains.

But ex-cybernetics engineer Pearson believes that humans are willing to take it one step further.

The Futurizon blogger believes that the visual screen will display human thoughts as the person is thinking them live. And that such technology: “I would think in a lab we’re probably a decade or 15 years away from that.” 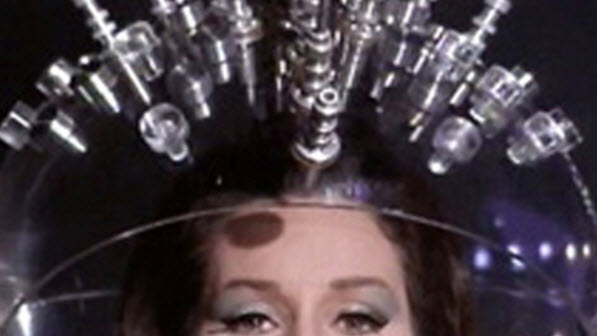 Deep fakes: The technology behind the artificial intelligence

BATTLE FOR WORLD / BBC – December 22, 2018: Another area of research using Artificial Intelligence (AI) technology is the “re-lip-syncing” of an individual to have them say anything.

(BattleForWorld: A sensational tool the Deep-State is probably itching to use on the public at some future time or may have already done so already because the ruling-elites are so much in control of the visual media watched by the population.)

The BBC video highlights the “re-lip-syncing” AI technology showing how easily someone can be made to say something at different time frames.

SPUTNIK NEWS / BATTLE FOR WORLD – November 9, 2018: The article highlights that China published its “Next Generation Artificial Intelligence (AI) Development Plan” in 2017, stipulating that the country should ultimately become the world leader in AI by 2030.

China’s news agency Xinhua has premiered the world’s first ever artificial intelligence (AI) news anchor at the Fifth World Internet Conference in the eastern city of Wuzhen. Opening the English-language broadcast, the computer-generated host said “Hello” in a robotic voice and added that “you are watching English news program.”

The English news agency announced that the virtual host “can work 24 hours a day” and will be used on the news network’s website and social media platforms in order to “reduce news production costs and improve efficiency.”

The creation of the AI news anchor by China is an effort to fulfill its goal to emerge as a high-tech powerhouse by notably becoming the world’s leader in AI by 2030.

(BattleForWorld: Artificial Intelligence (AI) is a normal evolutionary path to develop more powerful electronics with brains. This will advance into technologies where AI will also learn and become creative. AI technology will eventually become organic and by then their mechanical body will move almost more naturally to that of humans from the development of precision facial manipulation and limbs, etc.)

Artificially Intelligent Russian Robot Makes a Run for It … Again

BBC / BATTLE FOR WORLD – November 9, 2018: In the year 2016 a robot in Russia caused an unusual traffic jam after it “escaped” from a research lab.  The artificially intelligent bot made headlines after it reportedly tried to flee a second time, according to news reports.

Engineers at the Russian lab reprogrammed the intelligent machine, dubbed Promobot IR77, after the first runaway incident, but apparently it did not correct the problem.

Atlas, The Next Generation

BOSTON DYNAMICS – November 9, 2018: A new version of Atlas, designed to operate outdoors and inside buildings. It is specialized for mobile manipulation. It is electrically powered and hydraulically actuated. It uses sensors in its body and legs to balance and LIDAR and stereo sensors in its head to avoid obstacles, assess the terrain, help with navigation and manipulate objects. This version of Atlas is about 5′ 9″ tall (about a head shorter than the DRC Atlas) and weighs 180 lbs.

NEW YORK TIMES / BATTLE FOR WORLD – November 20, 2018: The article highlights the story about Abel Montoya, who as a boy remembers his father arriving home from the lettuce fields each evening, exhausted, mud caked knee-high on his trousers. “Dad wanted me to stay away from manual labor. He was keen for me to stick to the books,” said Mr. Montoya, who listened to his father and went to college.

Yet Mr. Montoya, a 28-year-old immigrant’s son, recently took a job at a lettuce-packing facility, where it is wet, loud, freezing with much of the work physically taxing, even mind-numbing and believes some of the work can be delegated to robots.

Among a new generation of farmworkers here at Taylor Farms, one of the world’s largest producers and sellers of fresh-cut vegetables, recently unveiled a fleet of robots designed to replace humans — one of the agriculture industry’s latest answers to a diminishing supply of immigrant labor.

The smart-robot machines can assemble 60 to 80 salad bags a minute, doubling the output of a worker.

Enlisting robots made sound economic sense, Taylor Farms officials said, for a company seeking to capitalize on Americans’ insatiable appetite for healthy fare at a time when it cannot recruit enough people to work in the fields or the factory.

The article noted that a decade ago, people lined up by the hundreds for jobs at packing houses in California and Arizona during the lettuce season, but this is no more. 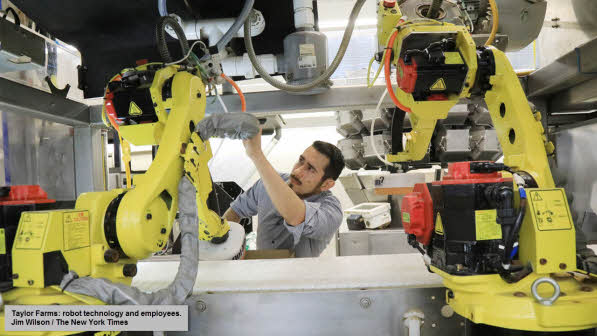 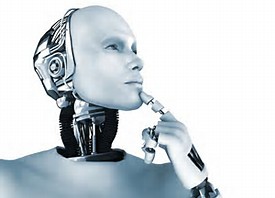 AXIOS – April 1, 2017: CEO Jeff Immelt says that General Electric (GE) will support futuristic manufacturing, having abandon business ventures like finance and network television to focus on building things like jet engines and gas turbines. Here are some opinions about automation and the future of work:

Immelt thinks that fears regarding robot-driven joblessness are overblown, and noted: “This notion of the war of the robots happening in the short term, that’s more of a Silicon Valley vision than the real world.”

(But the public believes that robots will make American CEOs richer due to their lower financial requirement than humans.)

Immelt says “It’s not just technology, but politics that drive automation: “The question of the last election was, ‘how do you create $25 per hour jobs?” …In a global economy, jobs that don’t require trained workers to leverage the power of computers and automation simply won’t pay that well.”

All business will be in the education business, says Immelt. And believes that GE and similar firms must do more to train workers to upgrade above tasks that robots can do…”