BATTLE FOR WORLD / PROPHECY CLUB – December 28, 2018: The first two minutes into the video highlights an update from Pastor Lindsey Williams about the Ruling Elites and President Trump.

Host Stan: I gave Lindsey Williams a call to find out what was going on and Lindsey says his inside sources told him that:

They are in a panic (- the Ruling Elites). A panic like I can’t even begin to describe or explain.

They, the Ruling Elites, are saying that Trump is destroying everything. He’s systematically step by step dismantling all of their plans that they have spent 50 years building up trying to form a world government.

And they (the Ruling Elites) know that they can not allow this thing (their world order) to fall apart with him (President Trump) heading it up, because he will destroy them.

So there’s a battle in world government circles like we have never ever ever seen. 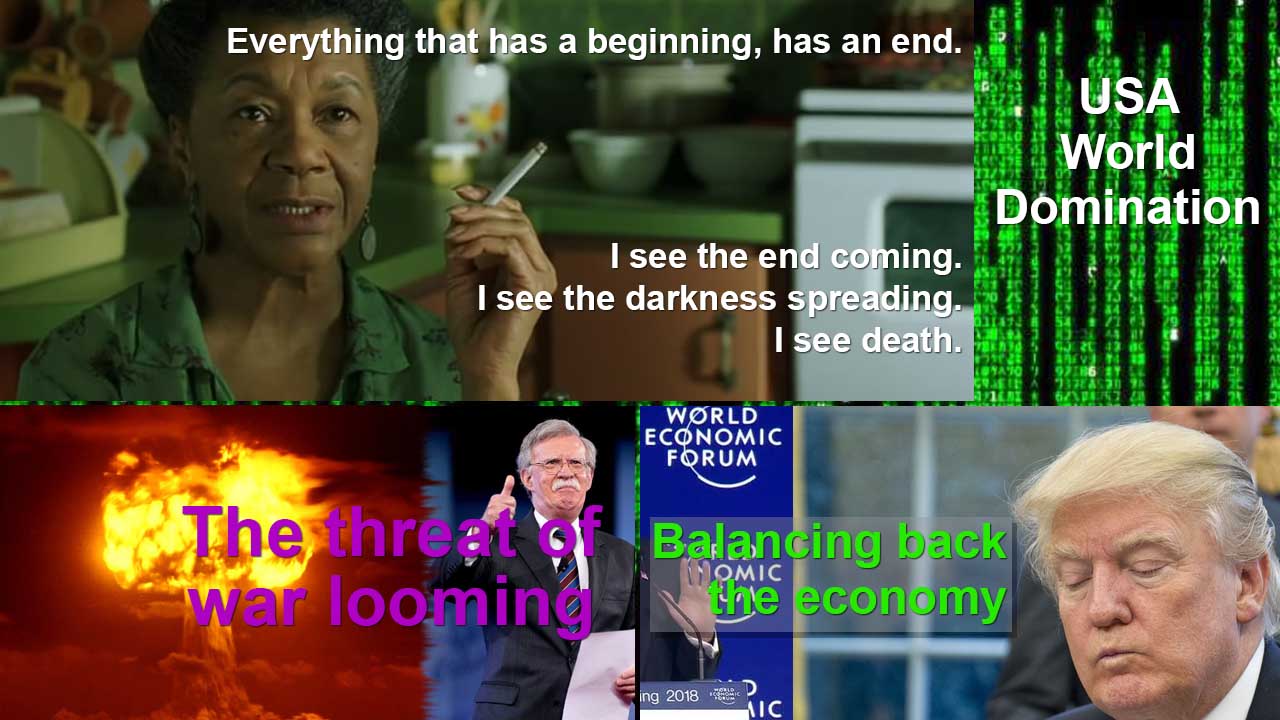 BATTLE FOR WORLD – March 22, 2018: This brief video clip from the Matrix sums it all up with annotations.

Oracle: …You and I may not be able to see beyond our own choices, but that man can’t see pass any choice.
Neo: Why not?
Oracle: He does not understand them, he can’t,  to him they are variables in an equation, one at a time each variable must be solved and countered. That’s his purpose to balance the equation. (BattleForWorld: In the economic sense, President Trump is trying to balance the economics in the math, but there are deeply finer things that he does not understand. He understands much of the business side of it, but the political and geopolitical sides he has to learn as he goes along. And during the process he will see things much clearer if he’s strong enough to stand against threats by the Ruling Elites against him. If he’s bought out, he’s just like all the other presidents.)
Neo: And what’s your purpose?
Oracle: To unbalance it.
Neo: Why? What do you want?
Oracle: I want the same thing you want Neo. And I am willing to go as far as you are to get it.
Neo: The end of the war?
Oracle: (nods yes.)
Neo: It is going to end?
Oracle: One way or another… If there is an answer, there’s only one place you are going to find it.
Neo: Where?
Oracle: You know where.
Neo: (blinks his eyes.)
Oracle: And if you can’t find the answer, then I am afraid there may not be no tomorrow for any of us.
Neo: What does that mean?
Oracle: Everything that has a beginning, has an end. I see the end coming. I see the darkness spreading. I see death. And you are all that stands in his way. (BattleForWorld: President Putin stands in the way of the globalist dictatorship ones – US, UK and EU.)
Neo: Smith. (BattleForWorld: The architect’s assimilator into one world globalization. The movement is trying to assimilate everyone – into world governance, surveillance, etc.)
Oracle: Very soon he’s going to have the power to destroy this world. But, I believe he (i.e. the movement of deception, fake news, world domination) won’t stop there. He can’t. He won’t stop until there is nothing left at all.
Neo: What is he?
Oracle: He’s you. Your opposite. Your negative. The result of the equation trying to balance itself out. (BattlleForWorld: To form a one world dictatorship.)
Neo: And if I can’t stop him? (BattleForWorld: The movement of globalization dictatorship.)
Oracle: One way or another Neo, this war is going to end. Tonight, the future of both worlds will be in your hands or in his.”

-The Matrix Revolutions. Transcript by BattleForWorld

SPUTNIK NEWS – June 9, 2018: The participants of the G7 summit reportedly unleashed a barrage of criticism upon US President Donald Trump, who was lambasted for challenging the existing international order.

Former Polish Prime Minister and the current President of the European Council Donald Tusk claimed that the “rules-based international order is being challenged” by none other than “its main architect and guarantor, the US”, according to The Independent.

We will not stop trying to convince our American friends and President Trump that undermining this order makes no sense at all, because it would only play into the hands of those who seek a new, post-West order, where liberal democracy and fundamental freedoms would cease to exist,” Tusk declared.