BATTLE FOR WORLD / CNBC | July 10, 2019: The article highlights BET network founder Bob Johnson, saying that America’s political establishment is riven by partisanship that has become “very wicked and very mean,” and added that the Democratic Party has become too liberal for his liking.

“The party in my opinion, for me personally, has moved too far to the left,” he said.  “And for that reason, I don’t have a particular candidate (I’m supporting) in the party at this time.”

“I think at the end of the day, if a Democrat is going to beat Trump, then that person, he or she, will have to move to the center and you can’t wait too long to do that.”

And Johnson said: “I think the economy is doing great, and it’s reaching populations that heretofore had very bad problems in terms of jobs and employments and the opportunities that come with employment … so African-American unemployment is at its lowest level.”

When asked about President Trump’s style of leadership – often considered divisive by those attacking him, by many in America and beyond, Johnson believes that Trump has “got his own style,” but that perhaps he needs to “step back a little bit from some of his showmanship.” 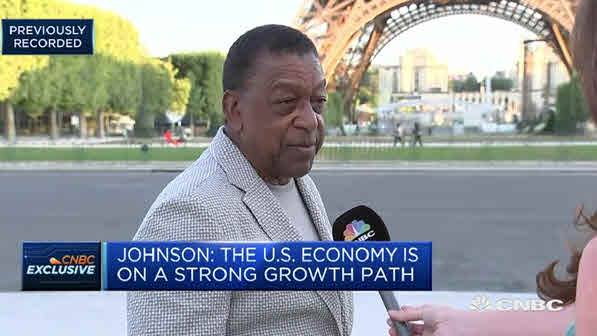 Google is ‘trying to rig the election’ in 2020 says Trump

BATTLE FOR WORLD / RT | June 26, 2019: The article highlights that President Donald Trump of the United States apparently accused Google of attempts to “rig” the 2020 presidential election. And that Twitter is blocking people from following him.

“They’re trying to rig the election” in 2020, Trump said, outwardly singling out Google in an interview with Fox Business on Wednesday (June 26).

According to Trump, Twitter and Google are silencing conservative voices, harboring “hatred for the Republicans.” And said that “Twitter is just terrible, what they do. They don’t let you get the word out.”

Project Veritas interviewing Whistleblower, a company executive: “They are highly bias political machine…that is bent on never letting someone like Donald Trump come to power again.” 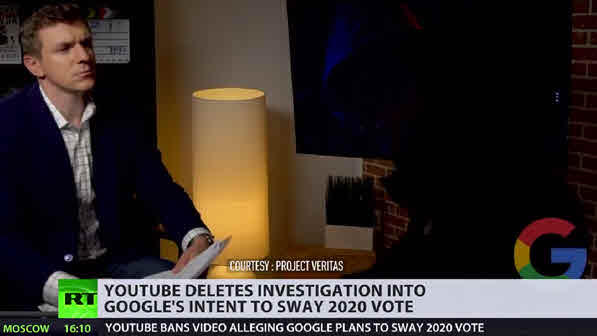 (In the Silent Revolution Of Truth, Compilation Edition, Volume 1, “enhanced”, the free PDF book: Download and read about Trump and the 2020 election and Google propaganda by Max Keiser, page 1123. The superpower USA could come to an end after 2020, page 1479.  Note: Use the page number display located at top right to find the correct page. Free Book, PDF Format – Links: Book Summary | and Download Book – Volume 1)

BATTLE FOR WORLD / FOX NEWS | June 26, 2019: The video highlights the usage of Google’s algorithms and how they benefit Democrats ahead of the 2020 election.  The leaked video by Project Veritas was taken down by Youtube.

(In the Silent Revolution Of Truth, Compilation Edition, Volume 1, “enhanced”, the free PDF book: Download and read about Trump and the 2020 election and Google propaganda by Max Keiser, page 1123.  Whereby at elections, the voters, are also being influenced, page 1126. In politics the wrong people usually get at the helm of government, page 1126. Secret plans are forged in order to drive Trump from office, page 1443. The candidates for state offices, etc. hide their true low mindset, page 1548. The superpower USA could come to an end after 2020, page 1479.  Note: Use the page number display located at top right to find the correct page. Free Book, PDF Format – Links: Book Summary | and Download Book – Volume 1)

BATTLE FOR WORLD / THE HILL | May 30, 2019: The article highlights that an American University professor, Allan Lichtman, a political historian, who has correctly predicted the last nine presidential elections says President Trump will win the 2020 election unless congressional Democrats, “grow a spine,” CNN reported.

He said Democrats only have a shot at the White House if they begin impeachment proceedings against Trump, and call the decision both “constitutionally” and “politically” right in the wake of [witch hunt] special counsel Robert Mueller’s investigation into Russian interference in the 2016 presidential election. (BattleForWorld: Apparently Lichtman advice if followed through would injure the Democrats even more and foment political divide in the United States that could easily erupt into the unthinkable. Maybe this is what the corporate media and destructive political forces are patiently waiting for? )

Lichtman has created a system of 13 “key factors” to predict whether the Republican party in the White House will maintain its hold. He says, so far, the Trump administration is down three key factors: 1. Republican losses in the midterms elections, 2. a “lack of foreign policy success” and 3. Trump’s “limited appeal to voters,” in the CNN report. Lichtman believes, impeachment would trigger a fourth key — scandal over the proceeding’s public nature. (BattleForWorld: Readers, just like Bill Clinton, they are looking for a public show performance. The unseen hands of the ruling elites, are attempting to put into production a public version of the Trump show, where Trump is the one under scrutiny. Entertainment for the public. Destructive. I guess neighbors and all will be exchanging…words. And many political talking-heads are uttering, “…lets take it to the streets.” Tragic.)

Nancy Pelosi continues to resist impeachment, but says ‘nothing is off the table’. And Jerry Nadler on impeaching Trump also says: ‘All options are on the table’. 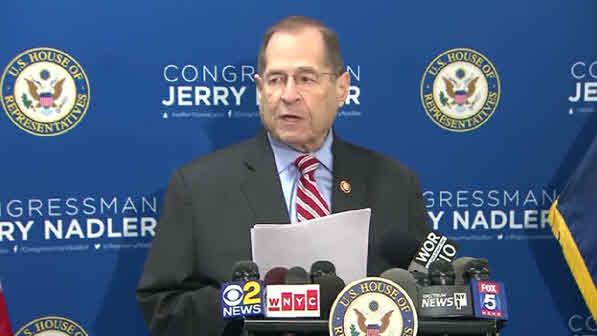 BATTLE FOR WORLD / YAHOO | April 16, 2019: The article highlights that President Donald Trump holds a “narrow” advantage heading into 2020 with his chances heightened by a resilient U.S. economy and a crowded Democratic field with no clear frontrunner yet to emerge, according to Goldman Sachs.

With more than 20 Democratic presidential candidates vying to replace him, voter turnout uncertain and the likely emergence of an independent candidate suggest that “President Trump is more likely to win a second term than the eventual Democratic candidate is to defeat him,” wrote Goldman.

(BattleForWorld: Trump will be re-elected. Trump is the golden child of the Zionists, they want him to bomb Iran first, and impeachment will end. And read what Rick Wiles said about the re-election of Trump.)

BATTLE FOR WORLD / CNBC | April 5, 2019: The article highlights a new poll of Wall Street insiders showing that a vast majority are expecting President Donald Trump to win reelection in 2020.

“Most expect Trump to win in 2020, but there’s still some nervousness around the event,” Lori Calvasina, RBC’s head of U.S. equity strategy, noted to clients. And that sixty-seven percent “of our March 2019 survey respondents believe that Joe Biden is seen as the most acceptable Democratic candidate by the stock market for the White House. No other candidate got a significant number of votes.”

(BattleForWorld: And the people of America must not get too overwhelmed and believing by their promises because for now, the presidential candidates, both Democrats and Republicans, are just mouthpieces for the ruling-elites’ crime-syndicates. All the presidential nominees and their congress helpers can do for now is continue scamming the public, keeping up appearances, until the charade comes to an end.)

Trump a Heavy Favorite in 2020

BATTLE FOR WORLD / MEDIAITE | February 20, 2019: The article highlights that already there are twelve declared candidates opposing Donald Trump in 2020, but the gambling political gurus are still heavily favoring Trump to win the next election.

The Examiner’s Washington Secrets columnist Paul Bedard, who spoke with the sportsbook manager at BetOnline.ag, Dave Mason, said: Trump is the overwhelming 3-2 favorite for reelection. 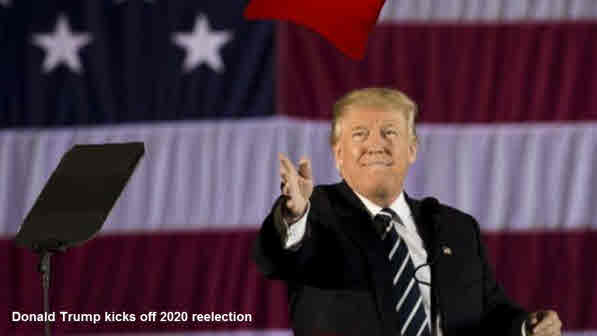 BATTLE FOR WORLD / HOLLYWOOD REPORTER | July 30, 2019: The article highlights the CNN network cutting away from Donald Trump’s 2020 kickoff rally held on June 18 after Trump supporters chanting “CNN sucks!” broke out across the crowded arena in Orlando.

The cutaway according to some revealed that whenever Trump attacks the media the feed is cut and directed into some other event. A change in CNN programming plans with the focus now on live candidate events (25 town halls) and experimenting with a live debate lottery ahead of the Detroit Democratic showdown.

“They’re blindly repeating the mistakes of 2016,” said a former CNN employee to The Hollywood Reporter. “Using a game show to pick the names of the candidates tells you everything you need to know about their approach to politics.” While CNN’s president Jeff Zucker said that “none of the campaigns had an issue” with The Draw, but Faiz Shakir, who runs Sen. Bernie Sanders’ operation, wasn’t a fan.

“When Jeff came in, he was trying to change the network to where Republicans wouldn’t immediately turn the channel,” one prominent GOPer said. “I think he accomplished that, and now he’s alienated them all again. “I’m not coming on CNN. There’s no upside”, said several people to the GOPer. 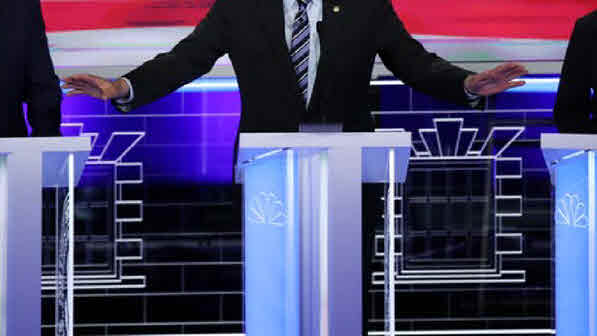 BATTLE FOR WORLD / NEWSTIMES | February 20, 2019: The article highlights about an increasingly large 2020 Democratic presidential field that is fighting two simultaneous battles: a chaotic intraparty primary struggle over how far left to push their policies and a broader question of how to confront the challenge posed by President Donald Trump, who has already begun casting the Democrats as socialists.

The article notes that Trump’s opportunity to define the Democratic field could be long-lasting: The president will have more than a year to portray the opposing party as radical before a Democratic nominee is selected.

BATTLE FOR WORLD / RT | February 22, 2019: The video highlights that Bernie Sanders has entered the 2020 race for president as the most well-known candidate in an already crowded field of Democratic hopefuls. And asked the question: Will enough Americans embrace his progressive agenda, or will he be forced to compromise?