BATTLE FOR WORLD / THE SUN | April 29, 2019: The article highlights that five men were brutally beheaded in Saudi Arabia for having secret gay lovers, tortured into terror confessions.

One of the 37 “militants” ruthlessly executed during a single bloody day last week is said to have admitted to having sex with four of the others. However, many believe the admissions – along with others during their one-sided court trials – may have been obtained under torture.

The Shia man’s “homosexual relationships” appeared in paperwork alleging he also confessed to hating the Saudi state, according to documents obtained by CNN news show.

In many of the Gulf states, which strictly adheres to Sharia law, homosexuality is punishable by death.

The man persecuted, reportedly denied all the charges against him and his lawyer claimed the confession was totally fabricated.

Backward countries like Saudi Arabia executes men and women for engaging in homosexual activity although they don’t release any official figures about how many gay people it beheads/kills every year.

(BattleForWorld: Before the Russian Olympics began in 2014, the West several months prior launched an all-out campaign against Russia for being anti-gay. Where prominent gays in America appeared on CNN, MSNBC, etc. chastising Russia and Putin. Now, the real thing appear: Saudi Arabia killing gay people, seated on the United Nations human rights council, a very close ally of the United States, and all those puppet gays who were bashing Russia and Putin are nowhere to be found. Tragic.)

Journalist James Kirchick on RT, very vocal about Russia being anti-gay. Did he give a similar performance against Saudi Arabia? 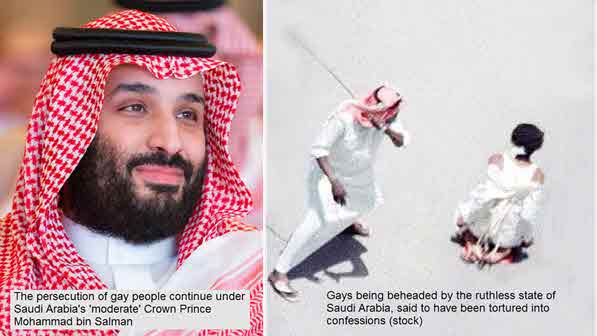 Related article:
Homosexuality – The Cause