Link: Forcing President Trump To Support The Bombing Of Iran

John Bolton most dangerous man in the world?

BATTLE FOR WORLD / THE GUARDIAN | May 16, 2019: The article highlights that the United States is closer to starting war with Iran than it has been since previous administrations. And Bolton is largely to blame for this posture.

President Donald Trump’s national security adviser John Bolton has been pushing for the United States to go to war with Iran even before he was assigned to his post. And many in the media are well aware of this because he has been talking about it for nearly two decades.

Everything that the Trump administration has implemented in its Iran policy, particularly since Bolton became Trump’s top foreign policy adviser in April of 2018, must be viewed through this lens, including the alarming US military posturing in the Middle East of the past two weeks. Which is much welcomed and encouraged by the Israeli government of Benjamin Netanyahu.

Just after one month on the job, Bolton has been a destructive force, giving Trump the final push to withdraw from the Iran nuclear agreement, which at the time was successfully monitoring Iran’s nuclear program and blocking its pathways to build a nuclear bomb.

Bolton has no problem with manipulating or outright ignoring intelligence to advance his agenda (– specifically, that of the Neocons and the Ziocons to create a greater Israeli in the Middle-East, and said if he had to lie, he would do it), which is exactly what’s taking place now to shape that future reality. 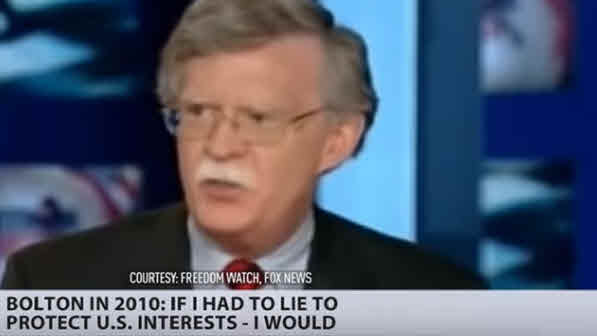 White lie? ‘I would lie for US national security,’ said Bolton in 2010

BATTLE FOR WORLD / RT | May 16, 2019: The video highlights John Bolton and his approach to foreign policy, RT has unearthed some of his old interview from 2010, where he talks about his professional motto – to lie in the name of American national security.

BATTLE FOR WORLD / RT | May 16, 2019: The article highlights that US National Security Advisor John Bolton is driving a destructive war policy in the name of Trump towards Iran based on nothing but his own deranged world view and anti-Iran obsession.

President Trump must come to his senses and realize that he would do America and the world a favor if he got rid of madman Bolton immediately.

Because the escalation of US military forces and war rhetoric against Iran is largely the making of one person – Bolton, the same person who advocated for the criminal, disastrous American war in Iraq under the George W. Bush administration. A war based on lies spun by Bolton and others resulted in over one million dead, millions of displaced Iraqis, thousands of American casualties, trillions of dollars in US debt leaving the Middle-East region inflamed with conflicts and terrorism – a total failure and misery in US foreign policy undertaking dressed up in the disguise of peace and democracy.

Even “Intelligence and military officials in Europe as well as in the United States said that over the past year, most aggressive moves have originated not in Tehran, but in Washington — where John R. Bolton, the national security advisor, has prodded President Trump into backing Iran into a corner,” reported the New York Times this week (May 14).

(In the Silent Revolution Of Truth, Compilation Edition, Volume 1, “enhanced”, the free PDF book: Download and read about the people of the Earth will still cry out in the coming years, when the two B. (i.e. Bush Sr. and Bush Jr.) take over the presidency in America, page 276. George Walker Bush in regards to power and the engagement of force, page 350. The two Bush presidents in America, pages 351, 352 and 353. The Terror War was officially started by George Bush Jr. on September 11, 2001, page 663.  Trump will do stupid things just like the Bush’s, Clinton, Obama, etc., page 693. Obama followed in the same path as the murderous predecessor George Walker Bush, page 831. The insidious and might-greedy criminal gang around Obama are the ones who governs, page 832. President Bush Jr. to respond to terrorism all over the world, page 904. The USA and especially two of its irresponsible US Presidents – father and son (i.e. Bush Sr. and Bush Jr.) – will have to bear the responsibility for both wars, page 1085. The war mayhem Bush Sr. and Bush Jr. plan to unleash in the Middle East, page 1168. Bush Sr. faction, 1488. George W. Bush and cohorts, page 1491. The US army marched into Iraq with tremendous spreading lies, page 1550. Note: Use the page number display located at top right to find the correct page. Free Book, PDF Format – Links: Book Summary | and Download Book – Volume 1)

BATTLE FOR WORLD / RT | May 16, 2019: The video highlights RT America Dan Cohen reporting that President Trump has received the President of Switzerland in Washington, DC today (May 16) amid escalating tensions with Tehran. And that Trump is reportedly frustrated with top advisors’ clamor for war with Iran, including the infamous neocon and national security advisor John Bolton.

BATTLE FOR WORLD / SPUTNIK NEWS | May 16, 2019: The article highlights that the US president’s national security adviser long known for his hawkish views on Iran, North Korea, and recently – Venezuela, according to a recent media report, is the mastermind behind the alleged plan to send 120,000 troops to the Middle East in a bid to counter Iran – something that Trump denied. And Benjamin Netanyahu of Israel is gladly fanning the flames for the breakout of war.

But rumors are spreading that Donald Trump could be considering parting ways with National Security Adviser John Bolton over disagreement with him pushing for forceful regime changes in Iran, Venezuela, and North Korea, as well as attempting to draw the US into another destructive war, according to two anonymous sources to The National Interest. Also reporting that Bolton is currently the main driver of the Trump administration’s confrontations with countries around the world. 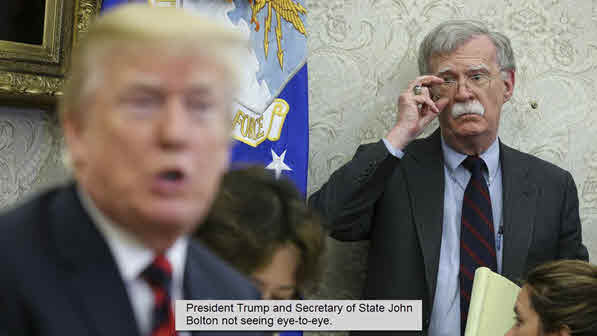 Trump Tells Aides He Does Not Want War with Iran

BATTLE FOR WORLD / SPUTNIK NEWS | May 16, 2019: The article highlights that President Trump reportedly has informed acting Defense Secretary Patrick Shanahan that he does not want the US to go to war with Iran amid rising tensions in the Middle East region.

On Wednesday (May 15) Trump raised the issue of war with the Islamic Republic of Iran during a briefing session on the status of US forces in the Middle East in the White House Situation Room, according to the New York Times, Thursday (May 16).  Trump reportedly had directly informed Shanahan that he did not want to see a conflict between the two countries.

News about Trump’s remarks to Shanahan comes as the president has sought to publicly dismiss reports of infighting among his staff, including national security adviser John Bolton, the Neocon and Ziocon hawk [working for the foreign power of Israel according to some]. “Different opinions are expressed and I make a decisive and final decision — it is a very simple process,” Trump wrote in his Twitter post.

(BattleForWorld: This could all be lies about avoiding war, when war plans are already made, and they are just waiting for the right time to implement it.)