BATTLE FOR WORLD / RT | October 7, 2019: Another wave of refugees and migrants may soon flood Europe again and this inflow could be even bigger than the last infamous crisis, a warning issued by Germany’s Interior Minister Horst Seehofer and urges Greece and Turkey to assist.

“We must do more to help our European partners with controls on the EU external borders. We have left them alone for too long,” the minister told German Bild Am Sonntag newspaper during his visit to Greece and Turkey, where he also talked about migration policies.

Seehofer stressed that “If we do not do that we will once again face a refugee wave like in 2015 or maybe even greater.”

The Interior Minister also warned that if Europe does not find some way to gather the “strength to solve this problem” Europe could see a “loss of control” if another refugee crisis breaks out. He also spoke with the Turks and the Greeks with the incoming EU Commission President Ursula von der Leyen and promised that the two countries would do “everything so that it does not happen again.”

Depositors Are Next as Nordic Banks Buckle Under Negative Rates

BATTLE FOR WORLD / YAHOO | August 11, 2019: The article highlights that banks in Europe are considering negative rates for customers.

Sub-zero rates have been the norm in Scandinavia longer than most other places in Europe as the finance industry undergone drastic adjustments to survive, relying more on asset management and other services that generate fees. But banks are eyeing traditional business of lending and holding deposits for negative rates.

In Copenhagen, Jesper Berg, the head of the Danish Financial Supervisory Authority, says that so far banks haven’t passed negative rates on to private customers for “political reasons.” But if this should eventually happen, “it will be interesting to see whether customers would accept that, or vote with their feet” and withdraw their savings.

While in Denmark, the FSA has warned that low rates increase incentive of banks to advise customers to move their money from deposit accounts to investment products that come with high fees. This makes it easier for banks to charge fees for investment products. … 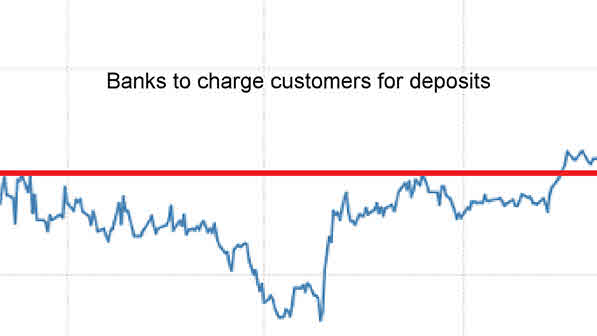 BATTLE FOR WORLD / CNN | May 29, 2019: The article highlights that German Chancellor Angela Merkel has said “there is work to be done” in Germany to confront the dark forces that are finding mainstream support there and in other parts of the world.

And said: “In Germany, obviously, they always have to be seen in a certain context, in the context of our past, which means we have to be that much more vigilant than others.”

We have to face-up “to the specters of the past,” and “We have to tell our young people what history has brought over us and others.”

A day after the European elections where the populists gained much support, Merkel and her globalist allies appear to be very unhappy. And threats are being issued about “dark forces” taking over Europe.

(BattleForWorld: Zbigniew Brzezinski made predictions decades ago that the Nazis would rise again among other things. Brzezinski worked for the ruling elites and repeated what he was told in the form of prophecies/analysis/opinions to the public about what the elites had planned to grab one world power. The ruling elites are not going to give up Europe so easily. You all remember the Yugoslavia war? The ruling elites were the ones who started it to which many innocent people died.)

(In the Silent Revolution Of Truth, Compilation Edition, Volume 1, “enhanced”, the free PDF book: Download and read – Europe will also not be spared of the evil, as hell lives there, page 1487. Zbigniew Brzezinski foretold about the resurgence of the Nazis…, page 1264.  Russian economist Dr. Tatyana Koryagina said, the ruling-elites have zero value for human lives, page 675.  Merkel-Regime – the Zionist with an Israeli Passport destroys Germany, page 529. Note: Use the page number display located at top right to find the correct page. Free Book, PDF Format – Links: Book Summary | and Download Volume 1 Book)

(BattleForWorld: Many readers might remember the shake of Hillary Clinton, almost falling on the street side, with her bodyguards lifting her into the van and driving away. Angela Merkel gave a realness moment almost reminiscent of Hillary.)

Merkel said she felt unwell while greeting Zelensky outside the chancellery amid hot weather in Berlin. The two leaders stood side by side as the band played national anthems of the two countries, when Merkel started shaking, moving her hands and swaying around a little, the footage from the scene shows.

BATTLE FOR WORLD / SPUTNIK NEWS | July 15, 2019: The article highlights that the landmark Cold War-era nuclear arms treaty signed by the United States and Russia, designed primarily to reduce the risk of nuclear war in Europe, is set to expire next month if officials from both countries are unable to save it.

“It’s clear that [the European Union’s] statement [on the INF] was made for the sake of appearances and carries strictly propagandistic goals. In fact, EU countries are submissively carrying out the directive of the United States on rejecting realistic measures proposed by Russia on the removal of counterclaims in the context of the INF Treaty based on mutual transparency,” the Russian Foreign Ministry said.

Moscow’s proposals aimed at saving the treaty remain on the table, if officials in Washington are ready to pick up the phone, said the  ministry.

“The decision on whether the INF Treaty will exist or not depends on the United States. Therefore, the EU’s appeals regarding its salvation are directed to the wrong address,” the said ministry.

(BattleForWorld: If the INF treaty cannot be saved, missile deployment will move ahead in European countries.)