Gaddafi’s Frozen Assets: How UK is Capitalising on the Libyan People’s Money

BATTLE FOR WORLD / SPUTNIK NEWS | July 1, 2019: As the article highlights Belgium’s mishandling of Muammar Gaddafi’s frozen funds, it turns out that the British government has been collecting taxes on the former head of state’s blocked UK assets.

Lawmakers in both Britain and US have discussed the legality of London’s move and shared opinions on whether the money will ever be returned to the Libyan people.

Neither the citizens of Libya nor the late Muammar Gaddafi have access to the £12 billion in assets the former head of state had in the UK, but Her Majesty’s Revenue and Customs has collected around £17 million in taxes on the assets since 2016, said the Northern Ireland Affairs Committee’s latest report.

The question arises, asking: is it legal to take money in taxes from the frozen assets of another state?

“In my view there is no legality in that”, said American lawyer and peace activist Dan Kovalik. “This is money that properly belongs to the Libyan people. In fact, what they are doing amounts to theft from the Libyan people, who really could use the money after the NATO bombing of Libya. They left Libya a shattered country. The West has done nothing to help it rebuild. And then to steal assets like that… is not only illegal but it’s immoral”. And said “This was nothing but old-fashioned bank robbery”. “I don’t think there was ever an intention to give that money back.”

BATTLE FOR WORLD / POLITICO | June 30, 2019: The article highlights that six years after Muammar Gaddafi’s death, his regime’s frozen funds in Brussels are generating tens of millions of euros in interest for mystery beneficiaries, despite international sanctions.

Gaddafi’s wealth is meant to be held in trust for the Libyan people until the war-shattered country stabilizes, but interest payments are flowing from frozen accounts in Brussels to bank accounts in Luxembourg and Bahrain over recent years, according to documents reviewed by POLITICO. The Belgium finance ministry says such payments are legal. 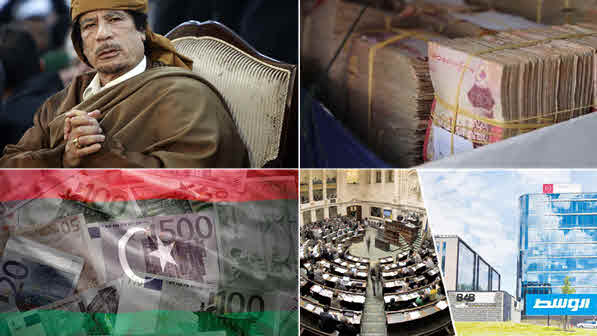 BATTLE FOR WORLD / SPUTNIK NEWS | June 30, 2019: The article highlights that the Northern Ireland Affairs Committee has revealed that the UK government took £17 million in taxes over the past three years from the £12 billion in Libyan assets frozen in the UK since a 2011 ruling by the United Nations during the civil war in which Muammar Gaddafi was overthrown and killed by the West. And UK’s Democratic Unionist Party (DUP) demands that the British government return the millions earned from Gaddafi’s frozen UK assets to the victims of Irish Republican Army (IRA) attacks.

According to the report Gaddafi’s government supplied weapons, including Semtex explosives, to the IRA during a violent conflict in Northern Ireland – known as the Troubles – used in bombing attacks across the United Kingdom.

Nigel Dodds, the DUP deputy leader, wrote in The Sunday Telegraph (June 30) that: “If we wait until there is a political settlement with Libya, then I fear many of the victims who suffered as a result of Libyan Semtex and guns will never see a single penny. They have died without justice and without any proper compensation. The Government has a clear moral duty to support our citizens, particularly those who have suffered so much”, he wrote.

BATTLE FOR WORLD / CITIZEN TRUTH | July 1, 2019: The article highlights that while the trucks from the West carrying the so-called humanitarian aid for Venezuela arrived at the Colombian border city of Cúcuta where the standoff took place after the Venezuelan government closed the border and blocked the highway with shipping containers and a fuel truck: The European Union and the United States agreed to send $60 million in aid, despite the fact that the Venezuelan government is demanding the return of more than $23 billion dollars frozen in accounts being held in the U.S., Canada and Europe that they consider stolen from their public treasury. That these funds could have been spent on the necessary import of food and medicine for the benefit of the entire Venezuelan population.

BATTLE FOR WORLD / THE TELEGRAPH | July 1, 2019: The article highlights that Venezuelan opposition leader Juan Guaido has launched an investigation after two members of his team allegedly stole money destined to help deserting Venezuelans soldiers in the country of Colombia. 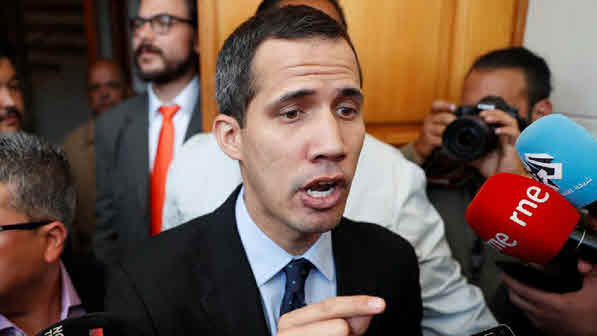 BATTLE FOR WORLD / RT | July 2, 2019: The video highlights the gathering of the United Nations security council regarding Venezuela on April 10, as the West tries its best to bring about a coup inside the country.

2:08:47, Russia’s UN ambassador: I just wanted to say that the government of Venezuela was ready to buy vaccines but the money was stolen from it. As we said the money had been deposited in British and American banks so the situation is simple here. First you (i.e. the US and UK) create a problem then you suggest that it be solved. Just to clarify things…

2:09:06, UK’s UN ambassador: I don’t want to get into any tit-for-tat, but the money (i.e. from Venezuela) was not stolen from a British bank. It’s very important that we correct these falsehoods.

2:09:29, Venezuela’s UN ambassador: To begin, I think its incumbent upon us to respond to the broad range of lies and false information we heard from the mouth of the Vice President of the United States, here…

Also proof of its lack of independence is its willingness to communicate with opponents of the government of Venezuela imposed by the United States and engages with communication with representatives. The Bank of England has no prestige,…what it is doing with us, it also did with Libya in the past.

The Bank of England simply ceases any opportunity available to it when a country is weak and it swings in the wind. The most recent example is that the government of the United Kingdom states that their traditional policies is to recognize states and not governments and that this will not change. In the case of Venezuela they did change that policy. And now they say that they don’t us [the country of Venezuela the] state. They recognize a puppet government which don’t even control a single street in Venezuela. The Bank of England swung into line behind this policy.

And the president of the central bank of Venezuela whom they have dealt with for years, they now say don’t recognize him because the government of the United Kingdom has changed their opinion. This is not an independent bank (i.e. the Bank of England). We need to thread carefully if you (referring to UK’s ambassador to the UN) believe that is the case [i.e. the bank being independent], because you are threading on dangerous waters.

In response to the [UN] ambassador of Peru, I think it’s worth recalling to him that the United Nations is not the book club of the United States of the Peru…