BATTLE FOR WORLD / RT | July 7, 2019: The video highlights some of the insider trading that goes on with big banks and the stock market.

Stacy: …The difference between these precious metals and these bankers and how they…they do manipulate the price – they do converse in chat rooms like telegram groups among themselves. They openly admit that to each other that they are manipulating the price. But at least like, if you go to an exchange like BTC-e that has now been closed down by the FBI – that was a Bitcoin exchange. But there are other exchanges now that have introduced the “Trollbox” and it sounds like exactly what a trollbox used to do – like people would be [saying] huge whale coming it and he’s dumping a whole bunch of this…like old coin and it would cause…markets to crash. So it was [sort] of transparent.

But…these bankers have way more asymmetric information that they are basically doing this to your pension funds. They are scooping pennies from your pension funds every single time they do one of these fraudulent trade. They only have to pay 25 million dollars, no jail time, no mention of them having to hand money back to all these pension funds and other investors that they defrauded.

Max: They have defrauded pension funds out of hundreds of billions of dollars in this scheme and many other schemes. Let me explain again the difference between markets today and markets that existed 50 to 60 years ago.

(In the Silent Revolution Of Truth, Compilation Edition, Volume 1, “enhanced”, the free PDF book: Download and read about misusing/ripping-off pension funds, page 1404. The retirement-institutions will no longer be able to pay pensioners, page 1414. At a future time, pension plans are no longer needed, page 1458. Note: Use the page number display located at top right to find the correct page. Free Book, PDF Format – Links: Book Summary | and Download Volume 1 Book)

In the old days markets earn “price discovery,” that is the price that is reported is the result of buyers and sellers. If there are more buyers than sellers the price goes up. If there are more sellers than buyers the price goes down. But that does not exist today in modern markets and there’s no markets in the world that is immune from this right now. Instead of waiting to see how the buyers and sellers [are] interacting on the floor of an exchange and then report that interaction as the “discovered price”.

Big banks like Bank of America which owns Merrill Lynch, they get together in a chatroom and they decide what price they want the market to be at tomorrow. And then they fill in the trades to get to that price. That is a complete inversion of free market capitalism. This is a form of kleptocracy, then kakistocracy, that has created a nightmare scenario where the only path out of this mess is through hard money (i.e. gold, etc.).

The Huge Fraud Behind Our Stock Market

REDACTED TONIGHT – May 19, 2018: Redacted Tonight is a comedy show written and performed by Americans, in America covering American news. (BattleForWorld: The stock market alters the entire engine of our economy creating an unlivable planet. It is the ultimate Ponzi scheme.)

BATTLE FOR WORLD / RT | September 24, 2019: The US Department of Justice finally catching on to the market manipulation by JPMorgan’s precious metals desk reported on Keiser Report nearly ten years ago.

Deutsche Bank In The Red

BATTLE FOR WORLD / CNBC | July 7, 2019: The article highlights that Deutsche Bank will exit the business of global equities and slash 18,000 jobs in a sweeping overhaul as part of a sweeping restructuring plan to improve profitability, to cost 7.4 billion euros by the end of 2022.

A bank once sought after to compete against America’s big banks on Wall Street, but has been rocked by scandals, investigations and massive fines stemming from the financial crisis and other issues in recent years.

In an ironic twist to all this news, Deutsche Bank has come under renewed scrutiny in the U.S. for its business relationship with President Donald Trump. And the House Intelligence and Financial Services Committees subpoenaed Deutsche in April (2019) for records on Trump’s finances. 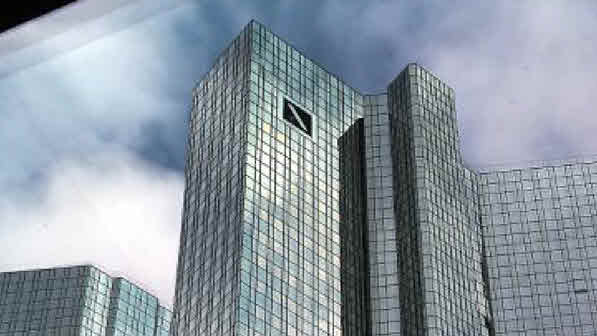